Thai League ready to explode the new season “Full of every match full of all cheers.” 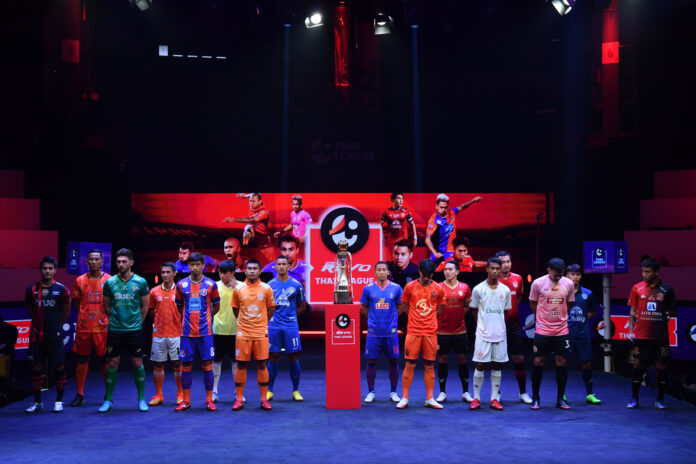 Thai League announces the opening of the 2022/23 season with the main concept “Full of every match Full of 100 cheerleaders” who want the professional football league in Thailand to return to normal, full 100%.

Last afternoon, Mr. Yuttana Yimkarun, Vice President of the Football Association of Thailand competition management Presided over the press conference for the opening ceremony of the Thai League 1-2 football match for the 2022/23 season at Rajadamnern Stadium.

Within this press conference, the main concept is “Full of every match full of hundred cheers” who want the professional football league in Thailand to return to normal, full 100%, consisting of Live broadcasts that reach every emotion

The format of the competition that can be viewed 100%. Get to know more athletes through the presentation of the story of Super Players, searching for rising stars from the Thai League who are ready to fight in every match to advance to the Thai national team players. The graphics are full of beauty.

By Mr. Yuttana said, “I am delighted. and it’s a great honor Who was assigned to preside over this event on behalf of the Football Association of Thailand. under royal patronage Welcome everyone to the arena of professional football league for the 2022/23 season of Thailand that is about to begin in the next few days.

Thank you to the club management team. all of you in sacrifice and dedication to develop and raise athletes Raise the standard of the team to a higher level. When all teams are ready The competition is fun, exciting, exciting, which is currently our professional football league. Was ceded to be the best league in ASEAN and 9th in Asia.

Each season, the Association and Thai League Co., Ltd. try to develop and upgrade the personnel involved in both the competition management department. Referee and related persons as well as bringing in new technology to improve our football league standards. We are the only nation in ASEAN / and there is no country in Asia that uses VAR, this season is the 3rd season.

The association is committed to developing and upgrading Thai football at all levels. To achieve international standards, I would like to thank all of the club’s service committees, supporters, athletes and people involved once again. May the 2022/23 season be a good year for everyone. The goals have been fulfilled,” said Mr. Yuttana.

On the side of Korrawee Prissananthakul Chief Executive Officer of Thai League Co., Ltd. has revealed that This season, all Thai football fans will be able to visit the stadium more according to the measures of each province. for a football cheering atmosphere that is full of every match full of cheers It also presents the story of SUPER PLAYERS from 16 top league clubs that will be arranged to make the athletes more interesting in line with the search for new young players under the age of 23.

Prepare to step into the Thai national team at the 2024 Olympics in Paris, and will also be more interesting with full graphics in terms of beauty and competitive statistics that will add to the excitement. More in-depth OPTA Stats

Importantly, there is also a section of NFT Football Fantasy that will help increase the fun of winning Thai football even more by collecting NFT cards and organizing your favorite team to collect points and redeem many prizes.

“I would like to thank the supporters who have been alongside Thai football for a long time. I believe that this year, the professional football league of Thailand. will be more intense and exciting able to see the stadium in full 100% and bring the atmosphere of cheering back to one of the most exciting years As all football fans have been looking forward to and finally, I would like to thank all the supporters who continue to step up with us and fight every match. Full of 100 cheers. Thank you.”

Mr. Chanin Chumpu, Acting Director of Commercial Vehicle Marketing Department, Toyota Motor Thailand Company Limited, said, “Toyota has been supporting and raising the level of Thai football for a long time and on the occasion that this year Toyota has been doing business with Thai people for 60 years. With the determination that Toyota has been a part in supporting and raising Thai football to the international level from the promotion and development from the youth level to the national level.

Including being the main sponsor of professional football league and cup football makes Toyota a true leader in supporting football at all levels in Thailand since the government has relaxed measures to control the Covid-19 situation. Sporting events and spectator limits are now 100% possible. Although there are still some epidemic outbreaks in each area, Toyota is ready to join forces to drive happiness and encourage Thai people to go through various situations and obstacles together.”

While Khun Nathi Osathanugrah M-150 ASSISTANT BRAND MANAGER Osotspa Public Company Limited, manufacturer and distributor of M-150 beverages, spoke about the opening of the M-150 Championship season this year, saying, “Over 6 years that M-150 supports the Thai football industry under the concept “M-150 for the fighting power of Thai football”. both regional Professional football league, national level to international level

This year’s M-150 Football Championship It was an exciting year. It is another great battlefield where we have 18 strong teams from across the region. Come to compete for the throne of oneness in this battlefield, the M-150 is proud to be a fighting force to promote Thai football to have potential. and develop the players to be even stronger which we are committed to developing Support Thai football From regional competitions to making progress for the Thai football industry To continue to be international, the M-150 is a driving force. and encouragement for all teams to fight To compete for the throne of the M-150 Championship in progressing to the top league.”

Part of the live broadcast, Mr. Rungthip Jarusiripipat Managing Director Entertainment and content business partners, Advanced Info Service Public Company Limited or AIS, said in the live broadcast of this season that “We are very proud and honored to be a part of Thai football once again for the second year in a row.

In order to pass on the experience of watching Thai live football content to the eyes of football fans across the country, the competition of the highest Thai professional football league, such as the Thai League, including the FA Cup, League Cup, Thai Futsal League and the Thai national football team as an Official Broadcaster via AIS PLAY. For this season, we continue to provide full specials for football fans to watch over 600 Thai football content, live in every match, including Look back, important highlights and special programs throughout the 2022-2023 season. Special for AIS customers, can watch Thai football with only 49 baht per month in the “BallThai” package. To apply, press *678*8# to call.

For customers of all networks, you can watch the Thai League battle. and Thai football as well when applying for the “PLAY Premium” package 199 baht/month or the “PLAY PREMIUM PLUS” package 299 baht/month via AIS PLAY in all channels, including the AIS PLAY application, the ais website th/aisplay, AIS PLAYBOX, SAMSUNG Smart TV, Apple TV, finally on behalf of AIS, we would like to thank the Thai Football League and Thai football fans. that gives us the opportunity to be a part of driving the Thai football industry We continue to strive to deliver a good viewing experience for Thai football fans to watch intense matches. and do not miss important shots in every seconds in every match You can check the schedule of live matches at ais.th/play/football”

For the Revo Thai League and M-150 Championship, the first match will begin on August 12, 2022, with support for fans to visit the stadium based on the measures of each province mainly. Together, send cheers together. full every match full of cheer

The post Thai League ready to explode the new season “Full of every match full of all cheers.” appeared first on INN News.