Apple and tech giants Google the throne is being shaken 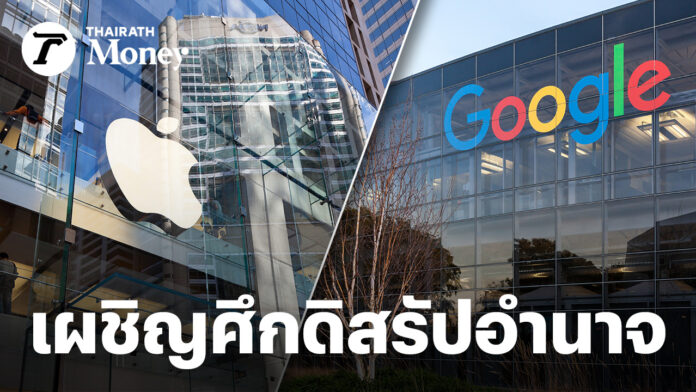 Apple faces a challenge. from breaking down the monopoly on the App market

In the past 1-2 years, both Apple and Google have been caught by regulator competitor and application developers Which has complained about the monopoly of competition and trade

By 2021, the US Senate It has begun investigating Apple and Google over competition and commercial exploitation on the App store and Play store platforms, according to complaints from popular app developers including Spotify, Tinder and Tile Inc.

especially Apple, which in the same year A lawsuit was filed by Epic Games, the owner of Fortnite, over the App Store’s monopoly on the app’s sales by allowing payments to be made through Apple only and deducting commissions from the app’s earnings. Apps up to 30% together

which the enforcement of this payment channel It’s not only allowing Apple to earn commissions for apps. but also revenue from all trading transactions that occur within the game.
That’s why games like Fortnite were removed from the App store because they didn’t comply with the terms of using their own payment methods.

And at the same time, Google is also being sued by Epic Games for the same charges.

However, Apple has responded to such cases. by reasoning that Collecting commission from various applications 30% is to bring income to develop systems, applications and hardware devices. To always be able to provide efficient service Enforcing the company’s payment gateway system ensures a consistent user experience. deceit free Therefore, in this allegation A California court has ruled in Apple’s antitrust case.

But after that, it was reported that Apple is currently working on restructuring the App Store to accommodate third-party providers in accordance with the new European anti-discrimination law.

Previously, there was some big news in the tech industry where Google seemed to admit that ChatGPT could be a serious contender. And it will be a problem for business after Google CEO Sundar Pichai issued a red code. ordered the team to speed up the development of AI products After experiencing the heat of ChatGPT, OpenAI’s intelligent chatbot developed an interactive model using Reinforce Learning techniques, making it possible to interact. and argue facts with data with humans quickly and naturally. and can be used for a variety of applications Especially helping to write content and fix programming code.

After being released in the first week, the number of users surpassed 1 million. These capabilities have resulted in comparison with the search engine system of Google, which has been criticized for providing It’s too important to sell website ads. Give users the opportunity to find the information they need. and less accurate

Thanks to the positive feedback from users and the intelligence of ChatGPT, it has attracted many investors. that everyone slapped their feet to ask for support Especially the main backer, Microsoft, which has previously invested more than 3 billion US dollars. Recently announced to invest an additional 10 billion US dollars. If the deal is reached, Microsoft will become a major shareholder. And benefit from the integration of ChatGPT with the search engine system. own like Bing to be able to compete with Google