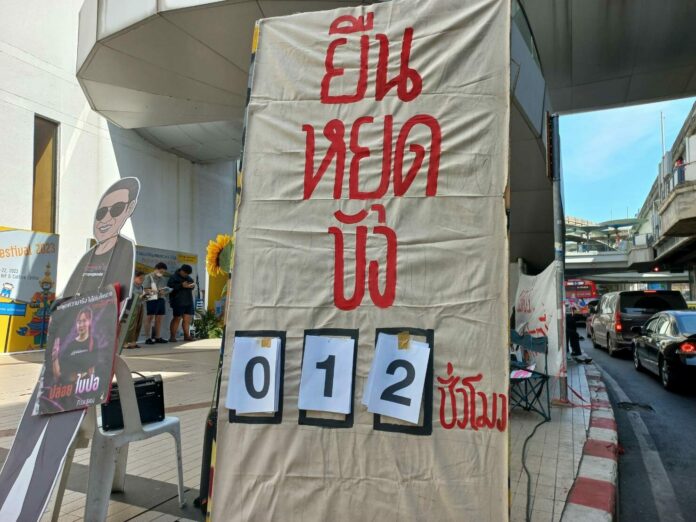 Continuing the group ‘Tlu Fah’ publishes an urgent announcement Make an appointment to do activities, stand, stop, detain for 112 hours in front of the Bangkok Art and Culture Center. Starting from January 22, starting at 1:12 a.m. on January 22 until January 26 at 5:12 p.m. S.S. Orawan Phupong or Bam, political activist, 3 items as follows

The reporter reported the atmosphere at 2:00 p.m. that the stand and detention activity had been going on for 12 hours with a number of participants. there is by hanging a sign and standing and reading a book Including labeling cloth writing various messages such as “Through the sky, stand, stop, imprisoned, 112 hours, 4 days, ruthless!”, “When you eat, 2 people starve while you drink water, 2 people starve” and “There are people Fasting in prison.”

There are also tents that serve as a resting place with fans and electrical connections. including drinking water There is also a desk to borrow books for free. There are paper signs stating Free Politic prisoners Stop violation of Human rights and Read for the right to bail, and books that can be borrowed to read such as Scenes and Life of Wat Wanyangkun, How to Resist Capitalism in 21st Century Written by Erik Olin Wright, translated by Pongprapat Sangsuriyong and Karl Marx, translated by Jit Phumisak, etc.

Mr. Thanaphat Kamphen Or Poon Talu Fah gave an interview to ‘Matichon’ about doing activities since the middle of the night at 1:12 a.m. that he had been standing for 12 hours now, with many people joining in standing and reading books together. The book has a variety of content. Be it politics, philosophy, etc.

“Now there are groups of friends that we gradually come to take turns. and the parents of red shirts joined in As for the people, there were people passing by and taking some pictures. We stand in detention to communicate to everyone that two of our friends are currently starving in the prison. The form of activity is to stand like this until the 112 hours are complete in order to communicate socially. Communicate this issue to society as much as possible. Because when people walk past this area Did he pick up his phone to read or did he read the banner we wrote? At least I was aware that two people were starving. And what is the Thai state doing?

We felt like coming out and fighting alongside them. At least in current and quiet situations now. may not be able to do much So stand still Standing and having a sign that says release our friends release all political prisoners Causing people outside to fight beside people inside Maybe not down the road like before. But at least we made a stand that our friend is still stuck inside and we will support our friend’s demands.” Mr. Thanapat said

Mr. Thanapat further said that I want the online world to help spread the news. that now there are 2 starving children in the prison That is, Tawan and Bam, at least 1 share, maybe a tattoo, 100-200 people have seen it and continued to talk.

“Don’t be indifferent. Whatever we can do, we do. We have media, we have social media in our hands, and we want to use it for our benefit.
Now my friend is still fighting inside. We just stand. To put it simply, our friend is starving. Sometimes we are tired and can still go home and drink water, but our friends are still in prison in the prison. lose freedom I couldn’t even count what he had experienced. And then we’re outside.

Sometimes we may be tired and discouraged. But at least there are people who are heavier than us. We also feel that what can make friends now What can communicate to friends the most, I want to make him Our goal is to insist that we will stand for 112 hours and communicate for 112 hours to let society know.” Mr. Thanapat said