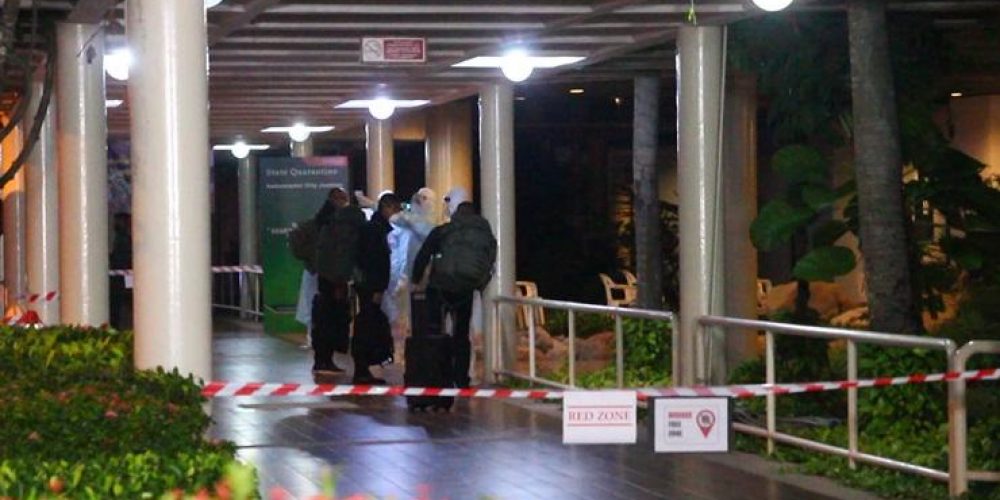 151 Thai soldiers attending a military exercise in Hawaii arrived back in Thailand last night. 11 of them have been sent to a hospital with suspicious symptoms, while the rest are now held in quarantine at a hotel in Pattaya.

The 151 Thai soldiers arrived at Bangkok’s Suvarnabhumi Airport, where they underwent screening according to strict disease control procedures.

During the disease investigation and screening process at the airport, 11 soldiers were separated from the group due to their flu-like symptoms. They have been transferred to Phramongkutklao Hospital for monitoring.

Meanwhile, 140 soldiers who cleared screening at the airport were taken immediately to Ambassador City Jomtien Pattaya hotel by bus. They arrived at the hotel around 9:50 last night, had their temperature checked again, and entered their rooms which they are not allowed to leave for the period of the quarantine.

Currently 195 Thai nationals returned from Sudan are also spending their quarantine at Ambassador City Jomtien Pattaya hotel; they will be cleared to leave on 25th July. Quarantine for this new group of Thai soldiers will end on 6th August.

The quarantine center is implementing strict security protocols to assure local communities that no persons will be allowed to leave until they are cleared to do so.