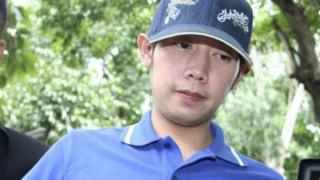 Charges have been dropped against Red Bull heir Vorayuth Yoovidhaya over the 2012 hit-and-run killing of a police officer.

Mr Yoovidhaya was accused of hitting the officer with his car in the capital, Bangkok, then fleeing.

He repeatedly failed to meet police to face the charges, which include reckless driving causing death.

Thai Police say these charges have now been dropped, but it is unclear why.

Mr Vorayuth is the grandson of Chaleo Yoovidhaya, who co-founded the Red Bull empire with Austrian Dietrich Mateschitz. At the time of his death in 2012, Chaleo was the third richest person in Thailand, according to Forbes magazine, with a net worth of $5bn (£3.93bn).

Police Sergeant-Major Wichian Klanprasert was riding his motorbike along Bangkok’s Sukhumvit Road when he was hit by a grey Ferrari, which dragged his body more than 100m (109yds) down the road, before driving off.

Investigating officers followed a trail of brake fluid to a luxury home less than a kilometre away. The badly-dented Ferrari was there, but initially the police detained a driver employed by the family as their main suspect.

When they subsequently discovered the car had actually been driven by Mr Vorayuth, then 27, he was tested and found to have excessive alcohol in his blood – but, he said, this was from drinking at home after the accident.

He was arrested but then released shortly afterwards. Subsequently, he was summoned repeatedly to face charges, but each time his lawyers said he was unable to do so, citing overseas work commitments and illness.

An initial investigation team had to be disbanded after an officer was accused of covering up for Mr Vorayuth’s involvement.

The closely watched case has fuelled criticism that Thailand’s elite enjoy special treatment by the authorities.