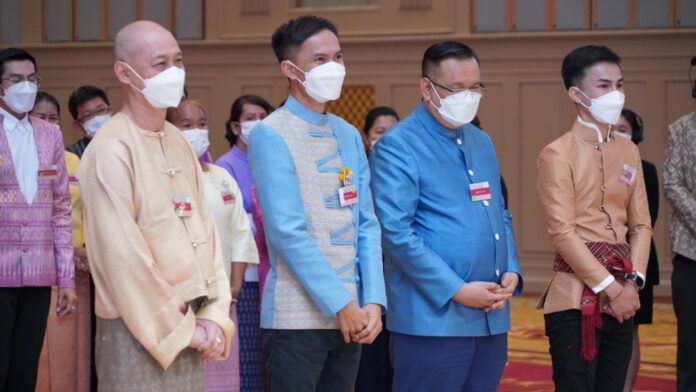 “for the works “Kidnaree Rattana Ratchakanya pattern fabric” The finalists for the national judging consisted of 61 fabrics and 10 handicrafts, in which the contestants presented ideas, techniques and methods of weaving, dyeing, with determination. by every piece All of them are the best works of Thai fabric with Khidnaree Rattana Rajakanya pattern. I have been through the creation, intention, and care to weave over a long period of time. But all the obstacles turned into a dedication to creating a piece to meet the needs of every contestant. with the desire to leadroyal cloth pattern “Kidnaree Rattana Rajakanya” pattern fabric to produce valuable works and all were grateful for His mercy. He is the chairman of the judges and is delighted to present his work before His Highness.”

Mr. Suthipong Chulcharoen, Permanent SecretaryMinistry of Interior said that for the results of the judgment of the royal pattern fabric contest “Kidnaree Rattana Ratchakanya pattern fabric” and handicraft The national judging round is as follows:

and 13 types of fabric and handicraft awards are:

Mr. Suthipong Chulacharoen, Permanent Secretary of the Ministry of Interior added that The Ministry of Interior would like to congratulate everyone who has been selected as the best work of royal pattern fabrics. “Kidnaree Rattana Rajakanya pattern fabric” this year, which everyone will receive a royal award fromHer Royal Highness Prince Sirivannavari Naree Ratana Rajakanya at the Thai Silk Festival 2022 on December 17, 2022 at the Queen Sirikit National Convention Center and would like to appreciate every piece of work that has been submitted to the contest Both fabric types, 2,946 pieces, and handicrafts, 298 pieces, all of whom are art and cultural keepers, who carry on, preserve and extend the wisdom of their ancestors. and ask them to be determined to develop themselves with the idea of ​​Her Royal Highness Princess Maha Chakri Sirindhorn Prince Sirivannavari Naree Ratana Rajakanya “Thai fabrics are fun to wear” and the knowledge that His Majesty has given to develop his craftsmanship and develop the work to be beautiful, creative, environmentally friendly. in line with the needs and preferences of the consumers In order to create jobs, create jobs, generate income and ask for help to encourage children in the family Children and youth in villages/communities learn Inherit the cultural heritage of these ancestors as an important tool for sustainable development of good quality of life.