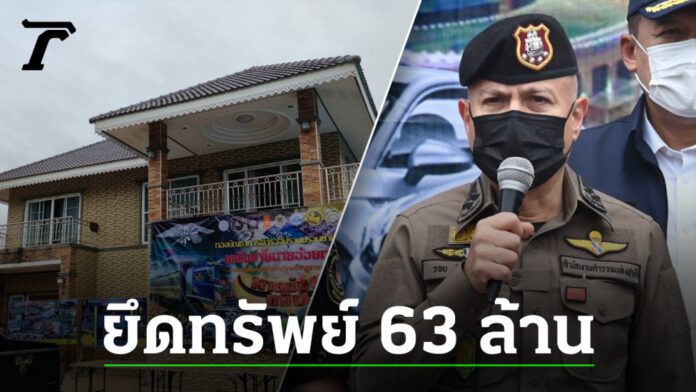 Lt. Gen. Roy said that since July 11 the past Narcotics Suppression Unit, NSDC, arrested 3 drug traffickers, along with 7 million methamphetamine pills Therefore, the results were expanded until it was found that the network had transported more than 20 drugs, including about 50 million methamphetamine pills. From last January until his arrest With more than 400 million baht in circulation, the group of commanders will send part of the money to drug owners outside the country. Another part will be used to buy assets such as houses, land, gold, luxury cars and keep cash in a personal bank account. thus leading to such operations

Deputy Roy added that for the four northern border drug networks, namely the Tamil Hoi network, the Hmong Mae Pao network, the Akha Pha Khao network. and the opium network of Muser It is a large network that carries a large amount of drugs into the central region. Officers therefore surrounded and searched 20 targets in Chiang Rai, Phayao and Chainat provinces. They were able to track down and arrest 3 suspects on an arrest warrant, namely Suwichak Achirapat, 44, a native of Phayao province, and Wirachon Ya-U, 40, from a province. Chiang Rai and Miss Siriphon Saengthammachot, 30, residents of Chiang Rai province, all of whom have been charged. “Together in possession of narcotics of category I (Methamphetamine) by the Chief in criminal networks, money laundering, joint money laundering, conspiracy by two or more people committing money laundering offenses.” were further prosecuted for “Possession of narcotics for sale, jointly possessing narcotics of category I (ice, methamphetamine) for illegal sale and distribution. and embezzlement Including the seizure of assets 985,000 baht in cash, 16,715,700 baht in bank accounts, 22 baht of gold, 8 land plots with buildings, 2 plots of land, 16 cars, 5 motorcycles and 1 tractor, totaling an estimated value. 63 million baht

Lt. Gen. Sarayut added that In the period of May-July The NESDB also arrested three more drug networks in the northern region, namely the Hmong Mae Pao network. Along with three suspects, 8,800,000 methamphetamine pills and 50 kilograms of ketamine were arrested at the entrance of Doi Siri village. Highway No. 1063, Dong Maha Wan Subdistrict, Wiang Chiang Rung District, Chiang Rai Province on May 18, the Opium Muser Network Along with 3 suspects, 48 ​​kilograms of raw opium was arrested at the Ban Kiew Lom Forest Park, Omkoi District, Chiang Mai Province on May 28. and Akha Pha Khao network with 2 suspects, 1,010,000 tablets of methamphetamine, arrested at On Phaholyothin Road, at the entrance of Soi 2, Ban San Kong, Village No. 7, Mae Rai Subdistrict, Mae Chan District, Chiang Rai Province on July 5, in addition

The Commander-in-Chief of the National Security Council continued that In addition, on July 28 The NESDB has seized 5,690,000 methamphetamine tablets, 10 kilograms of Ketamine, a black Chevrolet branded pickup truck with a license plate in front of Lot 6676 Surat Thani and 2 phones on the roadside of Highway 21 in the area. Pangcom Village, Pong Sub-district, Dan Sai District, Loei Province, is an investigation into the arrest of a group of Hmong people in Phetchabun province with 6,000,000 methamphetamine pills at Talad Tai parking lot, Khlong Luang district, Pathum Thani province on April 3. come The person carrying the said methamphetamine fled. From now on, the officers will investigate, follow up, arrest and prosecute the charges. “Having possession of a lethal type 1 drug (amphetamine) for commercial purposes” and continue to destroy the entire drug network.