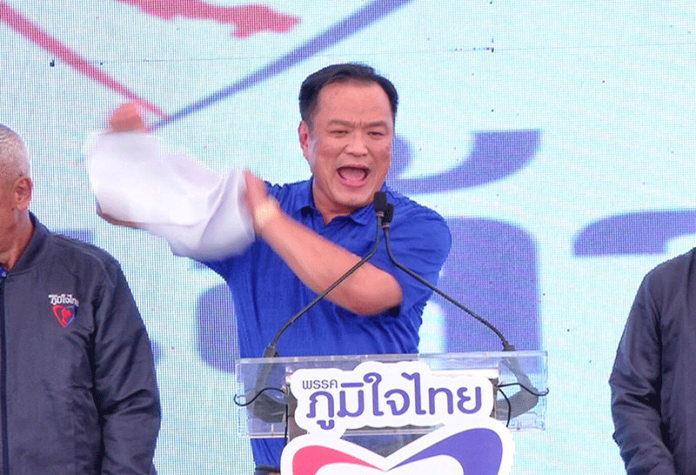 Anutin raises the Thai Pride team to step on the PDP’s nose, hit, cymbals, Phang-nga, snatching the owner of the former area as a dog who doesn’t understand the lion. Tell me soon I will come to help. In arranged to tear down the script in the middle of the stage, revealing Aree Krainara preparing to join the southern army

which while Mr. Anutin arrived, the rain was drizzling. Down a little before the speech In this regard, Mr. Anutin joined the cymbals with the southern long drum orchestra of the Marot villagers. Ready to join the dance with the people who come to welcome The atmosphere was fun and auspicious after arriving in Phang Nga province.

Then at 2:22 p.m., Mr. Anutin gave a speech on the stage. And has suggested that the two candidates for the Phang Nga Province MPs, ministers and party leaders who attended the event It was said at one point that he wants to go south Not getting a southern wife is not enough, must get a lot of MPs. Live in Isan, speak Khmer and want to speak in the south.

Our goal is to make people come to Andaman Ring Road. Must visit all must grow in the whole bar cannot prosper in one province It’s nice to meet people in Phang Nga and want to say every word but can’t read.

along with picking up the script that was prepared to tear the middle of the stage and said that he wanted to speak from the heart and announced on the stage that Today, friends from different parties came to the event. Who is deciding whether to join the party or not is Mr. Aree Krainara, a party-list MP for the nation.

During the period of Mr. Anutin’s speech, there was a halt. because I heard people interfering. Mr. Anutin then joked that he suspected that the PPP was around here. Who came to try the mic around here, I don’t know. which he came here with a lot of threats Come say it this morning, tell yourself you’re a lion because he had compared the lion to a mouse, but he was wrong.

He is a rat. His nickname is rat. Phang Nga brothers are lions. All Thai people are lions. All the Pride Thai Party is a rat. But I will help the lion Let the lion not just pat the mouse. And this morning, there was someone familiar with the brothers and sisters in Phang Nga Province. He said he was a lion, so why bark?

Give him a warm welcome, and then one day I will come to help the lion and that day will soon be over. Today we are proud of Thailand with warmth. This is the lion’s mercy. This is the grace we save in our memory. Only the people left to choose and we will serve with the best of our ability

See also  "Miao-Crab" Appease the fans. Tomorrow will bless everyone, invite them to take photos with "AR"