‘Amy Klinpratoom’ clearly answered, who was the Nong T. who almost crashed the wedding? Yes that everyone guessed or not! 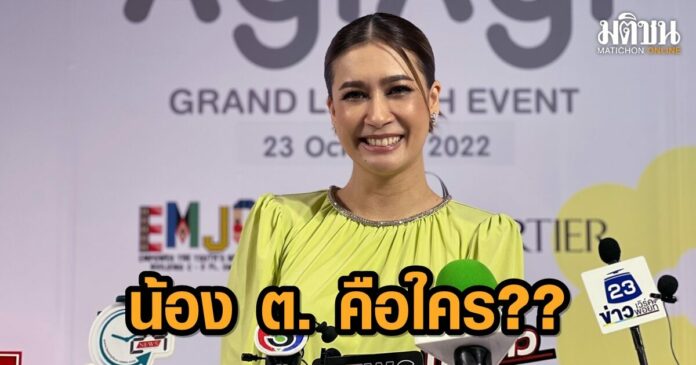 ‘Amy Klinpratoom’ clearly answered, who was the Nong T. who almost crashed the wedding? Yes that everyone guessed or not!

Became a buzz after the young heroine, Amy Klinpratoom, took her husband C Siwat to talk and tell the story. At one point, he said that he almost lost the wedding because Nong T. has already made many people connect to the girl of T., people in the entertainment industry, but recently, Amy joined the launch of organic products for the baby. AgiAgi at The EmQuartier He answered clearly on this matter.

Quite a viral story that tells you almost never got married?
“It’s about Mr. C who started talking. It’s not the size of a 3rd hand. His group of friends went to Hat Yai together, probably confused. ordinary travel time but did not exist or be caught with his skin But it’s something that his friends talk about and play with each other and make us think a lot. And it’s a story that happened about 10 years ago. It’s an event that we talk about that doesn’t feel negative anymore. We’re okay. Our life is okay now. We were able to tease without feeling anything.” There is an abbreviation that T. People also dig big?
“This one must apologize. I didn’t mean to offend anyone. T. Tao here is an outsider in the south. It’s not about the people in the industry that I’m talking about. When I said that, I didn’t really think to mention it. When people say it, am I going to cause any trouble? So I want to tell you here that it’s not related to anything. It’s something that happened a long time ago but the characters are the same. I’m sorry.”

At that moment, are you thinking of canceling the wedding at all?
“It’s a woman’s feeling, it’s mad. We’ve been through a lot of stories. I feel that if I’m not ready, I don’t want to dress up. But it’s dressed up (laughs).”

What makes us feel that this guy won’t flirt?
“Actually, we can never be 100 per cent sure. that both parties will not flirt or anything But it’s when we’re together trust or how to behave towards each other If we still love each other also take care of each other and being sincere to each other It’s still okay.”

After getting married, do you have any secrets?
“As far as I know, there isn’t, it’s not. When we grow up, we feel that being together is honoring each other. Maybe we interfere with something that may not have anything, and knowing what has already made us uncomfortable, we do not know better. Anything that is not too advanced We live together and now it’s okay.”

Husband said he was addicted to alcohol. Lost all the heroine’s pictures?
“Yes, it was called for training. Don’t call it a stick, call it we’re hanging out with friends and finally with friends. which Mimi is not a person to hide anything But we also have the responsibility to work on the day that the work is not messed up or anything. But maybe he told Then tell about where to go, everyone asks. Do you want to drink or not? It’s not that much. We are not neat people. Since when have we been like this? When we do our own shows, it’s quite real and people will see what we really are.”

Can you tell your husband if you’re free?
“I said that sometimes we don’t have to talk about everything. Making YouTube doesn’t have to be real. But what we’re saying is that we’re okay and don’t have much to hide. Before, before coming to YouTube, I was worried because there were a lot of people doing it. and feel that someone wants to come to know about us or follow us, try to do it, but after doing it, I feel that people like to go anywhere, people say hello. It’s quite different from the drama because people will love the character that we play But when we do a real list Wherever we go like this, people will love who we are. I feel happy. I want people to watch and relieve stress.”