Warawut, the new commander-in-chief of the Royal Thai Police, demands back 30 seats of MPs in the old area – hunting for 30 chairs 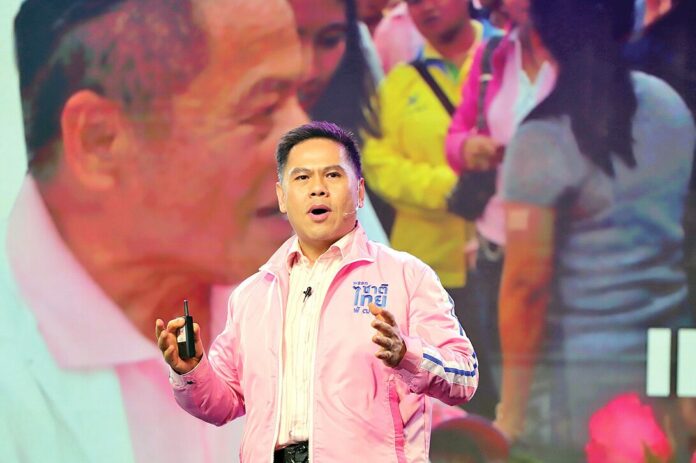 Warawut, the new commander-in-chief of the Royal Thai Police, demands back 30 seats of MPs in the old area – hunting for 30 chairs

note – Warawut Silpa-archa, Minister of Natural Resources and Environment (TCD) opened up about the case of taking the position of the leader of the Chart Thai Pattana Party (CTC) after the 2nd general meeting of the CTC party. Has a resolution to select a new party executive committee (Bor.Bor.) at the Miracle Grand Convention Hotel on October 3 past.

Throughout the past Since the Chart Thai Party came to the party We have been working together for 48 years, we have been through a lot of heat and cold. Through various events in the country, this year I am 49 years old, I have grown up alongside the party since the Chart Thai Party came. What former Prime Minister Banharn Silpa-archa has done to listen to the people’s suffering No one suspects a person named Banharn because he listens, does the real thing and solves real problems, which is a value that we value and practice until today. Moreover, Banharn takes care of all members, especially the MPs of the party, taking care of them like their own family, warm and welcoming. Sincere, will be fierce and encourage like family members. is what makes The MPs have the strength and morale to go out and work for the people. Mr. Banharn attaches great importance to his family. because of the warm care of the family In the end, family members will be people of social quality. Likewise, if a warm party will make MPs are important personnel of the nation. It is a practice that has been passed down to this day. and will continue to carry on this aspiration

Throughout the years, from the Chart Thai Party to the ChordPor Party, the party did not belong to any one family. Some people might say that this is what they say without fail, changing from older sister to younger brother. But I would like you to see what family before Silpa-archa belonged to the Chart Thai Party, the National Party, the National Party, each time there will be a big house to take care of. Before Mr. Banharn, there was Pol. Gen. Rab Adireksarn and Gen. Chatchai Choonhawan, who came today as Silpa-archa. Who will it belong to in the future, we can’t answer, but for sure, the party is not the property of any one family. We work for a reason listen to all parties snippet No one and no one has been able to cover the operations of the OCTA.

Next election we will listen. and actually do not boast because they want people to participate in the party MPs and Executive Directors to work in response to the public Thailand faces bigger problems than floods and the economy is Climate change affecting human life both being economy and society. Therefore, it must be done to make the people better

In the past, Banharn scolded teach this son Today I understand that Father Banharn prepared for his son. Prepared for Mr. Warawut on the day that Father Banharn is away. How can Mr. Warawut get to work for the NROT and the country, but this Mr. Warawut probably can’t work alone? To be able to move forward, it is necessary to have a team of OCTA, working together, believing and having faith in work. We are strong but not harsh. be humble never had a problem with anyone We believe in the potential of Thai people. There is nothing Thai people can’t do. work together so it can be true for further development

The party is currently accelerating its operations in many areas. find candidate as well as to remind applicants who have already launched Work carefully in all areas, especially the policy that is currently being done in accordance with the policy of listening to the truth, which three years ago the party DTC that joins the government It is a non-stop and concrete work.

in the next campaign to the applicant Members of the House of Representatives strictly follow the framework of the Election Commission (EC) to take care of the people to the fullest. Currently, flooding occurs in many areas. Helping people need to be careful, including me and Mr. Praphat Phothasuthon, Deputy Minister of Agriculture and Cooperatives. Work carefully to avoid political accidents.

Policy making must meet the needs of the party that will lead the party forward stably and sustainably. amidst the changing situation of the world and conflicts in different regions Thailand has to stand on its own legs. and make people at all levels, farmers, farmers including businessmen in each area standing on their own shin and how to make our country move forward in using resources most efficiently and profitably Make more money in your pocket ⦁ With the expansion of the party executive committee (ECB) from 29 people to 39 people to accommodate the size of the party EXP that will be bigger
past the party OCTO is a medium to small party. Regardless, we are always a medium-sized party. From now on, the new step of the party We are going to reclaim areas in many areas that the Chart Thai Party used to have flagged. And will make the party grow stable, slowly, but get a beautiful book As for the target for the next election, the NTC Party aims for no more than 25-30 seats. Today, the NTC Party has 12 seats. If we grow too fast, it will cause an accident. causing us to be unable to manage fully So confident that we can do it.

⦁ Palang Pracharath Party (PPC) may propose Gen. Prawit Wongsuwan, Deputy Prime Minister and the leader of the Democratic Party is a candidate for the Prime Minister will affect the party
On October 6, there will be a meeting of the party executive committee. to discuss again The party’s position After the election, who will shake hands with? when all parties have passed the election If it came to say that that party, this party would be too quick to judge. Ultimately, the formation of government is all an equation of addition. Now, let’s see how it is after the election.
Every vote counts, so the DPW would say that taking that group in particular would be too disrespectful. I think the work of the party From now on, we will work for the people’s brothers and sisters so that all groups have the potential to work together in order to ensure the stability of the party. Probably no party gave an interview that the next election would be the opposition. or ask the athlete if it will be the third to the fourth They all want to be number one.

See also  Fjord Trends 2022: Businesses should rethink their thinking When people review their relationships with their jobs, technology, brands and the world.

⦁ In the case of a viral clip with Mr. Chatchat Rights of the Governor of Bangkok. Answering questions from the media in English to solve the Bangkok flood problem until it is popular in the online world.
The clip happened to me and Mr. Chatchat. Thanks for the honor to work with Bangkok. Never thought it would go viral. But the heart of our work is to bring tools and equipment to help people in Bangkok. We are happy to support And it’s a bonus that people pay attention to my work. and focus more on work

⦁ A trend comparing the popularity of this model of the party.
Popularity cannot be passed on. A person named Banharn Silpa-archa has been working since 1932-2016, but the person named Warawut has been working for 3 years. And the political path cannot be accelerated. The most important thing is popularity and prestige. can not be forwarded because it’s on one’s own and the party executive committee that will accelerate the building of faith and create works that are more pleasing to the public Take your work as an indicator