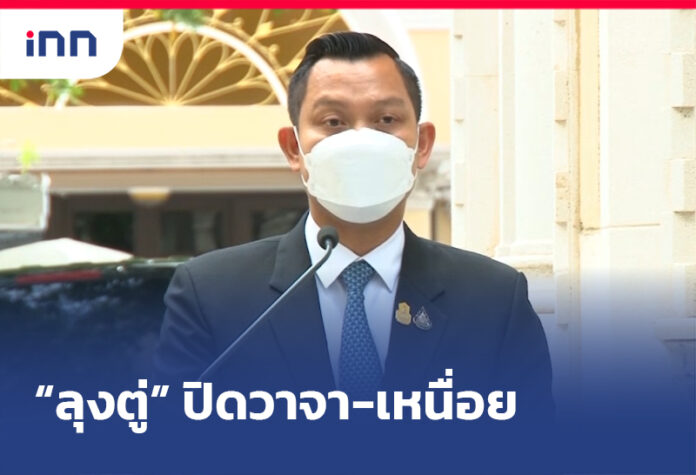 @See His Majesty through body language. “Prime Minister Uncle Tu” today (June 23) came quietly, walked past the podium, did not give a press conference with the press conference after the SME meeting, asked “Dak spokesman” to clarify the statement instead, confirming that the Prime Minister did not give interviews. Decrease speaking, not because of change in attitude. But because there is a lot of work There is a document file that must be signed. have to do a lot of work both follow-up meetings and visit the area to monitor progress That has been carried out in the past 3 years believe that people understand the work of the Prime Minister. Because the Prime Minister is a person like this, working hard and focusing on “People are in trouble. political retaliation Not very useful, should be reduced, but will clarify create awareness that is correct with the people better.”

@ not counted that the reporters noticed “Prime Minister Uncle Tu” will only talk about “homework”, has not spoken about politics for a week since last week until today, still avoids “spokesman Dag” to speak on his behalf until many parties assess the mode of “close speech”. of “Prime Minister Uncle Tu” at the rhythm, no matter what communication comes out, whether it’s the problem of “homework”, public administration, or “politics” that are converging at “Battle of washing” in the middle of next month Although hoping to have merit from the work “Open the city of Covid” to stimulate foreigner money to travel to Thailand “Economic pumping head” on July 1, some but had to meet “difficult crisis” from “Energy Crisis” caused by “Ukrainian War Crisis” that is affecting the global economy, including Thailand. who hasn’t recovered from the covids that have engulfed Rama, both the disease and the people’s stomach for 2 years

@As seen the other day “Prime Minister Uncle Tu” complained to the villagers in Sakon Nakhon province as he had complained for the past 8 years that there were 2 repeated crises, namely the Covid situation and the war. The government believes that we can continue to be strong. The most important thing is the heart to fight and be patient. The government will take care of it as much as possible. and believing that it will pass, it may be difficult, may be tiring; It seems to admit that the energy price crisis is not over in the near future. The government therefore had to plan to cope with the situation. to prepare measures to help people especially those with low income which suffered completely But.. can’t help much. because the government has limited budget and must maintain fiscal discipline Prior to that, there were critics on how to manage crisis situations. Both the issue of asking for profit sharing from private oil refineries and the knot for the National Security Council (NSC) to come and take a look at the energy and food crisis.

@Until “Dak spokesperson” had to explain instead. “Prime Minister Uncle Tu” (June 23) that the Prime Minister looks at the future or after this, the country’s situation in various energy crises Even outside the country, it affects Thailand. Therefore, the solutions It wasn’t finished soon, so he ordered the NSC to be the host to prepare various information. in military security, energy and all dimensions, with many sectors involved in view that this is a new thing that looks at the Prime Minister’s Vision that there will be a situation in the future which the whole holistic meeting, not just the NSC, which the NSC is the coordinating agency But there are many ministries involved in planning for future response and believe that Thailand’s energy issue can be solved well. If you look at many countries asking for cooperation to turn off the lights for 2 hours a day, which I think the government has solved the problem as best as it can.

@ called not counting matters “Billionaire brazier” that came out until it became a buzz, overall look, feedback that came back in taking action with particular problems “Prime Minister Uncle Tu” was assessed as being more “negative”. “Getting points” increases ratings The more the cadence was assessed as The “down” at the end of the government’s term is already complete. That has not counted the “war in” from “people who don’t love each other” like “Captain Nas” who just came out (June 23) helped crush the government’s weaknesses in solving the energy crisis. It’s not even time to be on the laundry day. declaring the head “Minister of Pracharat Power” while in the field of work, there is still “Chatchat”, the new Bangkok governor. elected to be “compared” to “Prime Minister” every move to visit the area or even the way of thinking, how to work, management that is clear, fast, see results at all, the more you do every movement of “Prime Minister Uncle Tu” seems right. “Keep an eye on” as if it did not resonate with the judges on many issues, including the issue of the Sensitive, the local issue affected by the energy crisis that is causing a wave of multi-party rallies from this week to the United States. next week All of which were seen as the cause. This makes it necessary to “close the speech” during this period.