‘The Story from the North’ campaign with Yaya-Urasaya 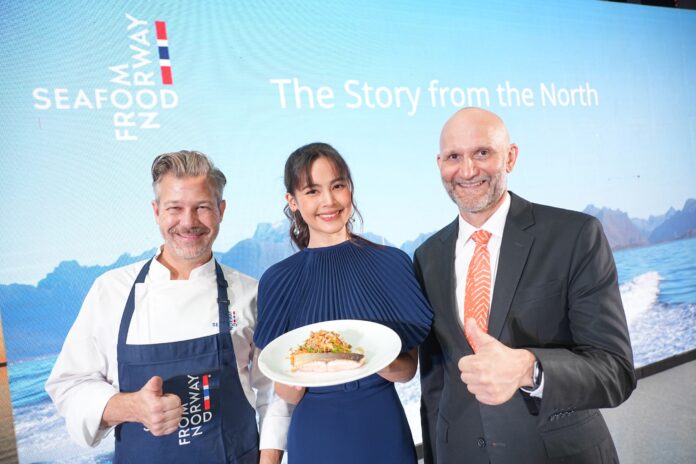 ‘The Story from the North’ campaign with Yaya-Urasaya reflects the Norwegian seafood country. and invites you to use seafood from Norway as a staple in Thai dishes.

Norway is a country known for its breathtaking fjord views and spectacular Northern Lights. For those unfamiliar with Norway The country is also the number one producer of Atlantic salmon in the world. and is one of the top seafood exporters with its cold and clean water. cold weather and a 2,650-kilometer coastline. Norway is a seafood country with a lot to discover. Through a centuries-old fishing culture that relies on people, nature and sustainability is the principle of life

The first time for the Norwegian Seafood Council (NSC) to launch the campaign ‘The Story from the North’ with Yaya-Urasaya Sperbund, a famous Thai-Norwegian actress. and the first presenter of Seafood from Norway in Thailand to reflect Norway’s seafood nation and invite Thais to try Norwegian seafood such as salmon, fjord trout and Norwegian Saba. It is a staple in Thai dishes.

Dr. Asbjörn Warwick Rethwaite, Southeast Asia Director The Norwegian Seafood Council (NSC) said, “Thai people are very familiar with Japanese culture and cuisine. In Bangkok, there are over 2,000 Japanese restaurants spread out, but few people know that Salmon Fjordera. and Norwegian Saba which is a staple of sushi and sashimi. All imported from Norway. We discussed how to give Thai people accurate information that these fish are from Norway. It’s not Japanese as it seems. But the challenge is that many people may not be able to get a feel for what Norway is like or what is interesting. And this is where the idea of ​​bringing Yaya-Urasaya Go experience Norway and learn about our seafood industry. to come back and share it for everyone in Thailand to know There is no one more suitable than Yaya.”

Video clip ‘The Story from the North’ length 2:40 minutes tells the story of people, nature and sustainability through the eyes of Yaya-Urasaya. in her second home Thai-Norwegian actor Representing the best from two worlds has traveled to Norway to return to the family’s embrace Try Thai Chef Terrier Ommunzen in Oslo, see sustainability and cutting-edge technology at Westeroln, a traditional and newest salmon cage in the heart of the Atlantic. Hike up the hill at Lofoten Hunt for the magnificent northern lights and a heart-warming experience with the locals you meet along the way. You can watch the full clip here. Yaya Urassaya Sperbund is a famous Thai-Norwegian actress. And the first presenter of Seafood from Norway in Thailand said, “This trip is very impressive. It’s a memory that will stay in my heart forever. glad to be back home and visiting places you’ve never been before like Lofoten met warm people see amazing nature and learned a lot about the Norwegian seafood industry. after returning from a trip Yaa was even more appreciative of the dishes as she witnessed the journey of the fish from the farm and the rigorous processes that prioritize the sustainability of the seas. Traditions and cultures that are deeply rooted in the way of life of the people. and a deep respect for nature Ya also sees that Thailand and Norway are similar in many respects. We value family very much. We love to sit and socialize at the dining table to eat delicious food. It’s not hard to find Norwegian seafood. Which is healthy and has a delicious texture. It will be able to be used as a raw material in Thai menus that are sure to satisfy the taste of Thai people.”

Norway is the world’s number one producer of Atlantic salmon and one of the largest seafood exporters. The country of seafood relies on sophistication and long-standing traditions of its people. respect for nature and innovation for sustainability To be a world leader in fisheries Norway adheres to strict guidelines. close monitoring and commitment to sustainable development With over 50 years of salmon farming experience, Norway is able to deliver high quality salmon worldwide in less than 48 hours after the fish is taken out of the sea. Norwegian salmon has one of the highest environmental standards in the world.