I conducted my research on transnational marriages in the provinces of Udon Thani and Khon Kaen. To protect the identities of the subjects, I shall refer to the community by the pseudonym of Ban Na Dok Mai. In total, there were 159 Thai women married to foreign husbands there. At first they lived in the same community, but later on they spread out over five different villages. The men hailed from 21 different countries, mostly in Europe.

If you ask the average Thai person about the wives of foreign husbands or mia farang, they would most likely say that the mia farang married their husbands for money rather than true love. Some would assume that the mia farang simply grew tired of a farmer’s life, and would much rather live a life of ease overseas.

While I was studying in the Netherlands, I had the opportunity to interview many married Thai women living there for my thesis. There was a strong common denominator for many of them; their Dutch (or otherwise foreign) colleagues in their various workplaces had all asked them why they had married their Dutch husbands, and how much money their husbands had to pay for them. It was clear that even those people viewed that money must have been the reason the mia farang had married.

If you ask the people in their village or their parents about why they married and moved abroad, you’d be told that they were good daughters who hadn’t abandoned their families back home, and sent money back without fail.

As you can see, the image of mia farang differs depending on to whom you speak. The local officials of the village and municipality, for example, view the mia farang and their husbands as an important resource for their communities. Without the mia farang and their foreign husbands, these officials say, there’s no way that Ban Na Dok Mai would be as prosperous or well-developed as it is. You wouldn’t see such large and beautiful houses nor would you see cars cruising up and down village streets. But the mia farang identity is a complex one.

Among the cultural differences between Thais and Westerners, the mia farang’s insistence on sending money to their families back in Thailand is perhaps the most prominent. All 26 interview subjects in my study made it quite clear that the ability to send regular remittances was one of the main incentives for marrying a foreigner. This is despite the considerable cultural, linguistic, and lifestyle differences–which they readily acknowledged as being quite difficult to bridge. Like Sommai Khamsingnok [the main subject of the documentary Heartbound], there is a sense of filial piety which must be satisfied. They must also support any children they’ve left behind.

Contrary to what many believe, most of these women do not go abroad to lives of luxury. They must work hard and save every penny in order to have money to send back home in Thailand. The lucky ones have husbands who understand, or at least accommodate their imperative to send remittances. But not all are so lucky. Since nuclear families consisting of a father, mother, and children are the cultural norm in the West, it can sometimes be challenging to try to include grandparents.

Divorce: another reason for hardship

The women say that a lot of negotiation is involved in sending money back to Thailand. One of the main reasons for sending money back is to support the children that they often have from previous marriages–usually with Thai men–who are in the care of their parents. They want to improve the lives of their children and parents. Yet, many of them are stressed and dismayed by the seemingly endless demands made on them by their families in Thailand. A new motorcycle, a new pickup truck, a new house. Then this person or that person falls ill and needs to go to the hospital. Sometimes, the burden is almost unbearable for these women who are working hard in a foreign land.

From my study of the mia farang in Ban Na Dok Mai, the trajectories that see them going abroad to meet with or be with their Western partners are not unlike Sommai Khamsingnok. They are likely to start in Pattaya before ending up overseas. Like Sommai in the documentary, “Heartbound,” many are asked by other women in similar situations back home to help find them a foreign husband, too.

Money is a main motivating factor, but it is not all for the mia farang. More often than not, a significant portion of the money is funneled back to their families in the village.

But it is by no means all about money. Thai men also have an important part to play in this migration. Out of the 159 mia farang in Ban Na Dok Mai, 100 of them have children from previous marriages with Thai men. In Isaan culture, it is customary for newly wedded husbands to move into the households of their wives. When they divorced, the men completely left the woman’s homes and their lives. The raising of their children became the sole responsibility of these women.

The responsibilities of man and woman

When you consider the gender roles of men and women in Isaan, it becomes clear the expectations of responsibility for men and women are a key factor.

Many Western husbands are left wondering why these Thai men have abandoned their children. Why are they not supporting their own children and contributing to the burden of raising them? Why has it fallen completely to the women to do this? The entire situation is quite at odds with the cultural norm for these Western men. Where they come from, it is often customary for both parents to contribute monetarily or otherwise–rigorously enforced by court order if necessary–regardless of which parent has custody of the children.

But in Thailand, these legal mechanisms and arrangements are next to non-existent. The burden of raising these children often falls to the mother. This is another key factor that drives these women out into the world to seek their fortunes. Those who have experienced married life already have some inkling that marrying a foreign may not be a path strewn with rose petals towards a panacea. They know that a struggle likely awaits them: starting with trying to communicate in a foreign tongue, adapting to a foreign diet that in no way resembles Thai or Isaan cuisine, and having to work very hard to make ends meet.

One thing that stands out with these mia farang is how they often become benefactors to their home villages. Communities with mia farang often stand out from other communities because they are more developed. There are larger, more extravagant homes there. When these women return home from abroad, they often make donations to schools, temples, or public facilities in their communities.

This often causes families with no one who has gone overseas in such a manner to feel a sense of inequality. It often falls on the community leaders to find a way to manage or distribute the resources gifted by mia farang so as to maintain harmony in the community.

Another interesting thing about Ban Na Dok Mai is a sense that the residents have a much broader worldview than people in other, otherwise similar communities. This is because so many of the residents have been abroad. Even if they haven’t, the influence that the mia farang have on their parents, siblings, aunts, uncles, and cousins makes for a rather cosmopolitan village, at least by local standards. They are more adept at using mobile telephones to stay in touch, and tend to be more receptive to new things.

Look before you leap

Anyone who’s interested in transnational marriage should gather as much information as possible before making the leap. We often hear of the many successes but fewer people are willing to broadcast the failures. Such is human nature.

While conducting my study, I found that the people in the village most willing to talk about their experiences are the people who met with success. But there are those with failed marriages, or who felt like they were duped. Worse still, there are those who were lured into human trafficking for sex or labor. The people who experience the dark side of marriage migration tend, quite understandably, to not be very keen to speak about it.

This imbalance in the popular narrative surrounding marriage migration does lead to a somewhat rose-tinted view of the whole thing for many.

Regarding the question of differences in responsibility between Thai men and Western men, I would say that it is more a question of culture. Thai boys and girls are raised quite differently, with the boys being encouraged to be more outgoing whereas girls are raised to take care of the home.

In contract, in Western culture, girls and boys are raised more or less the same way and are equally expected to keep house, in a way that Thai society still largely views as women’s work. Thai society expects that when the boys grow into men, they should focus on leaving the home to find work, and “bring home the bacon” for their families. Yet, in this day and age, women also have to leave home to find work but the gender roles and expectations have still not caught up.

Read this story in Thai 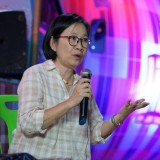 Dr. Patcharin Lapanan is a professor of sociology and anthropology at Khon Kaen University. The findings of her studies on Isaan women who marry foreigners can be read in the book titled, Love, Money And Obligation: Transnational Marriage in a Northeastern Thai Village.