The Good Daughters of Isaan (4) – Stop stigmatizing us, we Isaan women determine our own fate

Many people still remember the article by Phensri Phaoluangthong titled, “Character that determines their fate,” which was published on December 22, 2019 by Matichon Weekly magazine.

The sweeping generalizations in the article threw a lot of derision on Isaan women, in particular those who choose to marry Westerners, known colloquially as mia farang. The aspersions were cast even wider, to include Isaan culture as a whole. The backlash was swift and sure; social media was ablaze with people from all over Thailand–but mainly from Isaan–calling Phensri out for her blatantly discriminatory views. A Change.org petition calling for Phensri and Matichon Weekly magazine to officially apologize to the people of Isaan.

Apart from running a YouTube channel about women’s rights in Isaan, I have been involved with activist networks in the region for many years. After the publication of Phensri’s article, I filed a legal complaint against the author and Matichon Weekly magazine for defaming Isaan women and violating their dignity at the Khon Kaen provincial court on March 11, 2020.

The case was dismissed on the grounds that no specific injured parties were named. My lawyer Khumphong Phumphukhiao and I have appealed. We are currently waiting to hear from the court of appeals.

After graduating from high school in Khon Kaen, I moved to Bangkok for university. There, around the Ramkhamhaeng University campus in 1992, I had my first taste of discrimination common to what many other Isaan people often experience:

–“Isaan people have really pointy faces with big jaws because they eat so much sticky rice” (or in a more patronizing way, “Isaan people are so trusting; it’s sweet.”)

–“If you eat enough som tam with pla ra [fermented fish] in it, your nose will go flat.”

–“Isaan people are so desperate that they’ll eating dirt, eat mud, and all kinds of insects.”

This is but a tiny sample of the kind of verbal abuse–“teasing”– that went on. But it’s enough to paint a picture of what these people think of when they think of Isaan. The keywords are “speaking Lao,” “trusting,” “sticky rice,” “pla ra som tam,” “pointy face.” We were also stereotyped as domestic servants or manual laborers on soap operas of every TV channel.

When talking about the region of Isaan itself, the keywords that spring up are “hot,” “dry,” “cracked earth,” “dust covered,” “dirt roads,” “no trees or greenery.”

The question is: why have so many people from other regions of Thailand and in particular from Bangkok held this stereotype of Isaan in their minds for decades if not centuries? Why is it that these descriptors are synonymous with ugliness, shame, lowliness, and not what Thai men want? So many people actually feel ashamed to say that they are from Isaan, or avoided speaking Lao in public altogether, so strong is the stigma against speaking Lao.

So you see, this is not the first time that I’ve stood up against those people from other parts of Thailand who attempt to demean us and insult our humanity. I’ve had plenty of practice. It’s just that previously, I was only standing up for myself. This time, I’m standing up against the bullying that was being published by a magazine with nationwide circulation. The writer of this article is the kind of person that is lauded as a model for Thai society: highly educated in Thailand’s most renowned universities as well as abroad, is well known in literary circles, and has servants who come from Isaan.

See also  Thailand's updated Covid guidelines: What to do if you test positive or have symptoms

Today, I’m here to tell people from the rest of Thailand this:

1. Isaan is not just inhabited by ethnic Lao. There are many other ethnicities and cultures living here, such as Kuy, Nyaw, Phu Tai, Khmer, Indian, Chinese, Vietnamese, and probably many more that I don’t know about. Yet, when people from elsewhere call us “Lao,” they’re not even referring to the ethnicity. For them, “Lao” is synonymous with stupid, dorky, backward, bumpkin, unrefined, undeveloped. You get the drift.

Another word that has been corrupted is “siao,” which in the Isaan-Lao language means the kind of deep and strong platonic relationship that exists between true lifelong friends. Yet the people not from Isaan now use it as a synonym for lame or unfashionable, such as “why are you dressing so siao today?” Sometimes they say, “you’re a siao-face,” which is basically the same thing as calling someone a “Lao-face.” That this is used as an insult really says it all.

2. Isaan has a monsoon season, trees, and green grass, just like any other part of Thailand.

3. The Isaan of today bears hardly any resemblance to the tired old tropes still bandied about by many people who have probably never even set foot in Isaan. There are people here with Bachelor’s degrees and doctorates just like in Bangkok or anywhere else, and our universities are pretty much equal to those found elsewhere in Thailand. There are even international students here. We have good roads going in every direction of Isaan. We have some of the largest and most well-equipped hospitals in the country.

Isaan people have a strong interest in politics and often tend to be quite progressive. Women are at the forefront of Isaan’s development and activism for social change and justice, and form the backbone of any community in Isaan.

4. The Isaan women who’ve married foreign husbands are able to access education, and have extended that level of access to their children and other relatives. They pay the taxes that pay for government services and infrastructure all over the country just like anyone else.

This is just a part of what I would like to say to the Thai people outside of Isaan (the ones who still have their heads down in their own little worlds). But there are a million other things about being Isaan that wouldn’t fit into this piece. If you still can’t see how fast the world is turning now, and how Isaan has kept up with the changes, you’re the one who is backward.

I also have this to say to the centralized Thai state: from now on, the people of Isaan will determine their own future, starting with using their votes and voices to amend the constitution!

Translated and edited by The Isaan Record 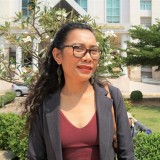 Pintong Lekan is women’s rights activist who has been engaged with social justice campaigns in the Northeast for many years.