The Good Daughters of Isaan (18) – Has online dating changed the dynamics of Thai-Western relationships?

When Biya Kaeowiangsiw, a 22-year-old junior at Khon Kaen University (KKU), set up an account with ThaiFriendly, an online dating site, she did not expect it would change the course of her life.

“I didn’t expect to meet him there,” Biya says about her similarly-aged American boyfriend who she’s been dating for a year. “When I started using the website, I created my profile and I found lots of old guys. I was just about ready to quit but then his message popped up and we started talking.”

The couple is now planning on leaving Thailand and moving together to Nebraska, her boyfriend’s home state.

Many Thai female university students have hopped on the trend and created online dating profiles. “For the new generation, like KKU students, dating foreigners is a normal thing,” Biya says.

A survey by YouGov found in 2017 that four in ten Thais have used dating websites and apps. Among millennials the number rises to 47 percent. Almost half of all respondents (49 percent) said they know at least one couple that’s met through a dating service.

As the world is becoming increasingly globalized, dating apps like Tinder, ThaiFriendly, and ThaiCupid have changed the game. Now, Thais can easily connect with potential partners from around the world without having to use expensive matchmaking services as was common before, especially in rural areas.

The initial intentions of many users of online dating sites and apps are not always romantic. Many KKU students spoke of how they originally set up their profiles to learn about other cultures and practice their English–or simply out of boredom.

Pingpong Jongdee, a junior at KKU, never imagined that would end up finding a boyfriend when she downloaded Tinder.

“At first I didn’t want to date him,” 21-year-old Pingpong says. “I just wanted to have a foriegn friend online, to talk with him, and study about their culture, without going to that country.”

Similarly, Noppamas Upapong, also a junior at KKU, heard about the dating app, hello, from her friends and decided to join.

“At first, I was just feeling bored and I heard other people were using the app, so I just wanted to try it,” the 21-year-old says. “I remember that I wanted to practice English, but I never matched with Thai guys.”

When asked why she never matched with Thai men, she said that she was “more likely to click with foreigners, more than Thai men.”

Not “clicking” with Thai men

Mainstream beauty standards in Thailand require women to be of slender build, with a narrow waist and light skin. This has made it popular for Thai women to use whitening products and get plastic surgery to have more Caucasian or Korean features.

“Thai people and Western people have different meanings of beauty,” says Patcharin Lapanun, a lecturer at Khon Kaen University who has done research on marriages between Thai women and foreign men.

“For Westerners, they love tanned skin and the shape of a woman’s face. But for Thai men, those who have dark skin represent low-class people. It is not desirable by Thai beauty standards; Thai men instead like white skin,” Patcharin says. “Isaan women with tanned skin are not beautiful in the Thai mind.”

Many of the female students interviewed for this story felt that their appearances did not seem to meet common beauty standards, limiting both their chances and desires to have a Thai boyfriend.

“I have a lot of Thai guys as friends but when I asked them if they would respond if I would make a move on them, all of them say I am not their type. Their types are small, skinny, white skin, small white nose,” Biya says.

Biya also spoke about not connecting with Thai men as part of her reasoning for wanting a relationship with a Westerner.

Beyond the issue of beauty standards, female students also felt that they did not want to adhere to the traditional gender roles that are common in Thai relationships. The men often prefer to play a dominant role, while the women are supposed to be submissive and take care of their husbands and the family.

While this concept may be considered outdated for some, some young Thai males still seem to want to keep these gender roles alive.

Although Thai men’s preferences for female partners have changed over time, with virginity becoming less of a decisive factor for partner selection, some still think it is important.

Setthe Sakunthong, a senior at KKU, says his ideal girlfriend should be “very polite, a girl who is courteous and takes good care of the man.” The 22-year-old student believes that dating websites and apps played a role in changing Thai women’s attitudes about dating.

“A Thai girl should be married to one guy, have one love, but now, everything has changed.” Now, says Setthe, “The girls are more interested in one-night stands and using dating apps to hang out. That’s why I don’t really like dating apps.”

But sexual behaviors and attitudes in Thailand have actually been changing rapidly for years. A study published 2016 in a peer-reviewed academic journal of sexology found that young Thai women’s sexual attitudes and standards have become more similar to those of their male peers.

With new information and ideas more accessible than ever, many Thai women have found themselves aligning with Western feminist ideals. A new generation of women are abandoning old customs and are now desiring a more equal relationship.

“From my experience with Thai guy friends, they always complain about how their girlfriend’s dress: ‘This is too short, this is too much,’” says Biya. Thai men want to be “the leader of the family and they also treat their girlfriends like their followers.” But with her new boyfriend, Biya feels like she is “the leader.” 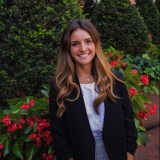 Kate Santaliz majors in International Affairs and Journalism at the George Washington University. She studied development and human rights issues in the Northeast last spring.