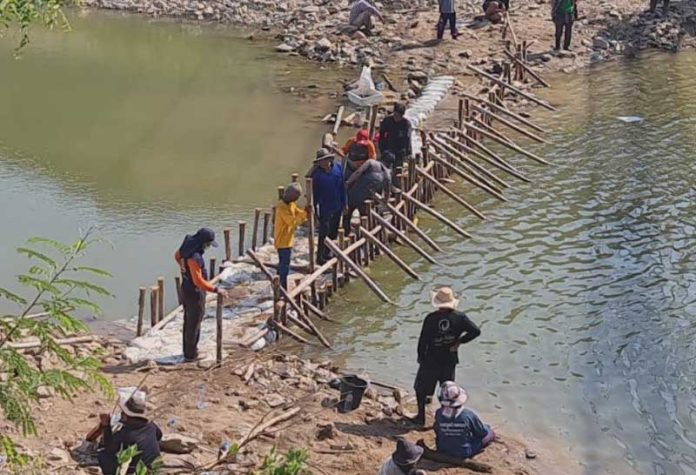 Sukhothai villagers in Pak Khwae sub-district join together to build a dam in the middle of the drought-stricken Yom River.

Commander Payungsak Suwanno, Muang Sukhothai District Chief Along with Mr. Weerasak Saengthong, Pak Khwae Subdistrict Administrative Organization President, and more than 100 villagers of Pak Khwae Subdistrict, came together to build a dam in the middle of the Yom River. at the area under the Bang Kaeo Bridge, Mueang Sukhothai District, which is the watershed point of Mueang District After irrigation, water was released from the Ban Hat Saphan Chan floodgate. came down to help farmers in the lower part of 3.3 million cubic meters by villagers in Pak Khwae Subdistrict, Mueang Sukhothai District, together with Pak Khwae Subdistrict Administrative Organization, therefore gathered together to bring sacks to pack sand. to create a border separating the Yom River before the water in the river dries up or runs out This is to store water for consumption and agricultural use during the dry season. It is expected that this year, farmers and water users may suffer from drought, causing water shortages when it enters the drought.