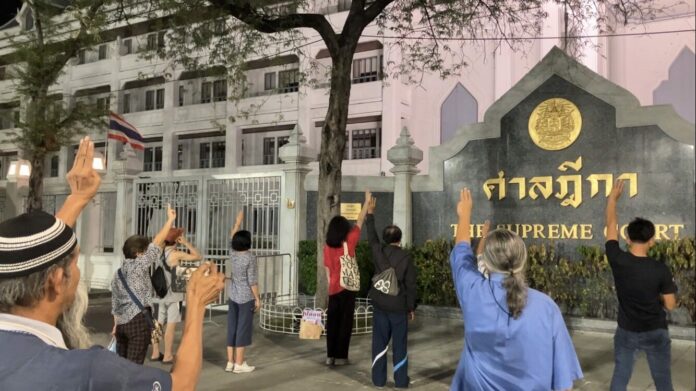 On November 10, in front of the Supreme Court Ratchadamnoen Nai Road, Phra Nakhon District, Bangkok, a group of counter-inhabitants, led by Mr. Pansak Srithep organize activities Stand, stop, detained for 1.12 hours It’s the 168th day to claim bail for political activists. by standing for 1 hour and 12 minutes from 5:30 PM to 6:42 PM.

Later at 6:47 p.m., Mr. Pansak said We participated in the 3rd round of stand-alone activities to demand bail for 11 political inmates in prison, two in homes.

At the same time, Mr. Pansak reported on the news of the incident in the afternoon at the page through the live broadcast of the incident that nearly 10 police officers, both in uniform and under uniform, tried to search the area without any warrants. while the activists were writing cloth labels Including traveling to report to the subpoena at the Phu Phing Krachaniwet Police Station. of teachers and students of the Faculty of Fine Arts, Chiang Mai University, with over 40 undercover and undercover police stationed

“At 13.00, students and activists Activities in front of the police station The police tried to seize the sign. Art equipment to be displayed causing chaos and injuries

The Court of Appeal convicted Ammy The Bottom Blues for splashing paint at the police, guilty of three counts, sentenced to two months in prison, a fine of 20,000 baht, and a one-year suspended sentence.

The Krabi District Court dismissed the 6 defendants in the Krabi Carmob case. held on August 1, 2611, deemed not guilty of any charge under the Emergency Decree.” Mr. Pansak said

Then Mr. Pansak and participants Facing the Supreme Court, held up 3 inches and said “Release our friends release the innocent Refund of bail rights, cancel 112” 3 times at the same time before the end of the activity