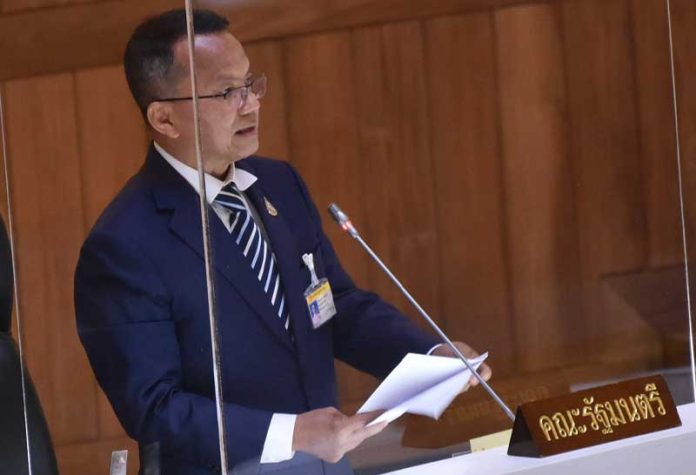 Minister of Justice proposes bill to prevent recidivism hope to prevent crime make society safe Some members of the chairman ordered to postpone the next resolution.

Somsak Thepsutin, Minister of Justice, presented the draft bill. to the meeting of the House of Representatives that the principles of the said bill To have effective legislation to track people who have committed sex crimes. or using violence such as murder, rape, rape, child sex offence. including injuring others to death because in the past, despite following the duties of the administration But it is not enforced and is not effective in preventing recidivism that is likely to repeat the same or similar type of offence. Therefore, there should be specific laws to prevent recidivism. by establishing corrective measures rehabilitate the offender be careful after the sentence detention after release Protect society and the victims from committing another crime. to promote the rehabilitation of offenders Taking into account the rights and freedoms of those who demand appropriate orders

Mr. Somsak discussed the reasons and the necessity to propose a draft law, namely behavior and risk of repeat offences. to establish special legal and practical measures to prevent re-infringement Emphasize appropriate measures for rehabilitation of sex offenders. outrageous about sex The shocking cases that will be under control include the case of Somkid Phumpuang, the case of Bang Mua, the case of Ice-Hip Lek, or the case of the Nakhon Ratchasima massacre by a mad sergeant, etc., by this draft law. developed from research studies and has measures accepted by the United Nations and adapted to be in line with society to develop and prevent crime Aiming for the principles of justice in accordance with international base measures and building confidence in the justice system

Another draft of the same subject has also been proposed. By Ms. Patcharin Sumsiripong, Member of the Bangkok Metropolitan Administration, the Pracharat Party and the group, most members of the group agreed with the draft bill. Subsequently, the members asked to postpone the resolution. because it is an important law But the members in the meeting room are sparse. Therefore, the commission has not yet been agreed upon. Therefore, the chairman of the meeting ordered to postpone the resolution to the next meeting. and adjourned the meeting at 7:00 PM.