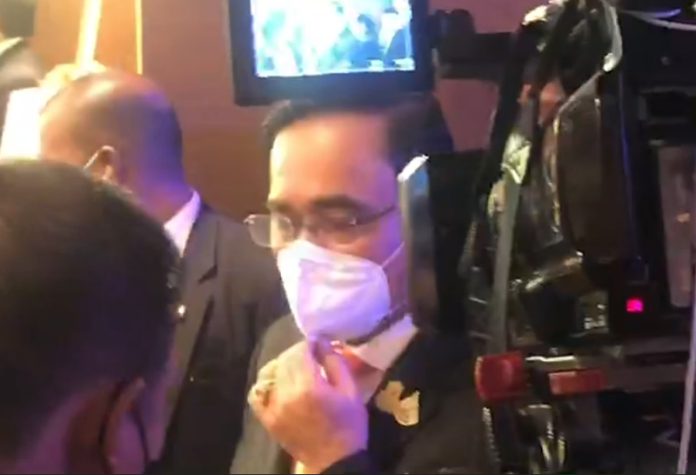 Prime Minister encourages “Lisa” is addicted to covids, saying that she is a Thai person, she has to encourage each other, revealing that she often stumbles during this period. Tell your heart first and think too much. Get older, but your heart is not old yet. Still fighting.

Gen. Prayut Chan-o-cha, Prime Minister, presided over the ceremony to announce and award the SMEs Excellence Awards 2021 and the Thailand Corporate Excellence Award 2021, saying at one point that The past has inevitably affected both life and economic changes. The government is ready to promote and support between the public and private sectors to drive the economy. Which believes that the private sector is ready and has the intention to raise the country’s competitiveness Thailand has an opportunity and a place on the world stage. Which has received many compliments from abroad, ready to cooperate with Thailand And he is ready to transform Thailand, especially the agricultural sector. but requires cooperation from all sectors and emphasizes that The 20-Year National Strategic Plan is not that it will last for 20 years, but it is the preparation of the Master Plan. In order to make the country stable, prosperous and still standing, the government is ready to take care and facilitate various aspects. The government spends a lot of budget to care for those who are not healthy and are not strong. Along with maintaining the discipline of finance and finance. But there may be some problems because there are many things that will require a large budget during this period. but believes that all sectors will cooperate with themselves to give Thailand a place on the world stage

The prime minister admits that the economy is in trouble due to the impact of Covid-19, but today has done his best to keep the economy moving. It will try to keep unlocking. However, it will require cooperation from all sectors, especially the places that will cause the epidemic of the coronavirus, which is a matter that must be paid attention to because it does not want a new round of explosions. there is enough But many people do not want to inject. because they are waiting for the vaccine that they want But the vaccine that has been injected has been approved by the WHO and all vaccines are available. Side effects vary. I have to accept the risk as the first two cross vaccinations are AstraZeneca vaccination. The actuator needle is Pfizer. which he injected as an example to see, as a leader, it’s okay Despite some risks

The prime minister also insisted that today he wants to do something for the country and the people and reiterates that he has never done anything wrong. By stating that walking frequently stumbles look forward So I stumbled a bit. The body is here, but the mind is already ahead. The media took it to write a comedy. Well, a lot of people work I think a lot every day. It’s normal when you get old. But the heart is not old, still fighting And many people came to encourage me to fight. He is ready to fight in any form but fight in a creative way. do not want to cause a split but to create stability in the country

The Prime Minister has given Lisa Blackpink’s strength after hearing the news that she has contracted the coronavirus. By telling them not to ask, being a Thai person, everyone has to support each other.