Police arrested a young man who did not reconcile with the girl, detained and published secret photos on social media 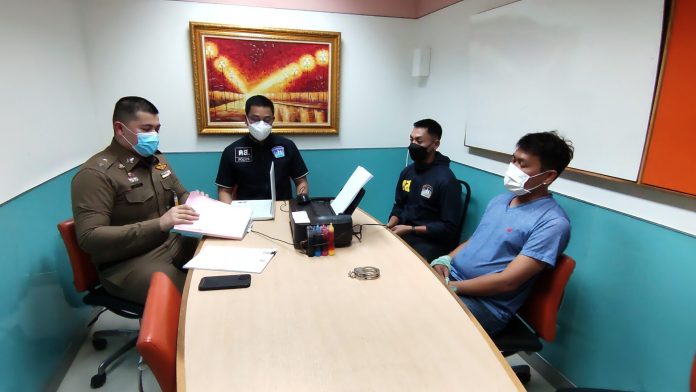 On October 20, at Bang Khen Police Station (Bang Khen Police Station), Pol. Col. Teerachai Chamnanmor, Deputy Commander of the NESDB NS. along with Pol. Lt. Col. Piyarat Vejsakosol, Deputy Superintendent of NSSC, Pol.Maj.Gen. Chakri Nareephon, Senator of the NCSC. Lieutenant Colonel Charin Luisang, Pol. Lt. Col. Yukon Pakeksuk, Deputy Inspector-General of the Royal Thai Police. and the police force of the NCPO, the NCPO, by Pol.Maj. Col. Chanachai Siri, Kor.Sor.Sor.Sor.Sor.3, the Election Commissioner of the NESDB Deputy Senator Kor.SorSorSorSorSorSorSor3, the Investigator of the NSSC, jointly arrested Mr. Kwanchai Klumplu, 39, the accused under the Criminal Court’s arrest warrant No. 1922/2564 dated October 19, 2021, on the suspicion of “bringing enter into a computer system where any obscene and computer data may be accessed by the general public, causing fear or shock to others by intimidation”, along with the medium of the phone with published clips and handcuffs 1 He was arrested at the village of Mu 3, Samrong Nuea Subdistrict, Mueang District, Samut Prakan Province. last morning

Pol Col Teerachai said that the Election Commissioner’s Office along with the NESDB have jointly arrested the culprit in the case of filming a clip with a lover. But later on breaking up, the clip was posted on Facebook and Tiktok damaged the victim. threatening bullying victim and is an offense under the Computer Crime Act

previously Miss Pim (a fictitious name) has arrived. at the Child and Women Welfare Supervision Division for help because Was received by Mr. Kwanchai, a former boyfriend, made death threats and published a private photo. and their own video clips that were secretly filmed while they were together into online media various applications which made Ms. Pim Being embarrassed and scared, the EDSA officers have come to help the victims. and eventually arrested the perpetrator

Miss Pim’s side the victim said He had been in a relationship with the accused for about 4-5 months, and last month they had an argument and fled from the house. which the accused tried to reconcile, but he refused to reconcile He even came to know that the accused had secretly taken a picture of himself without clothes on Facebook because he had tagged himself in order for him to see. There are also threats to harm both themselves and their peers. The cause was probably jealousy. In the past, the accused had been handcuffed to lock himself in the room so that he would not go out. So he tried to speak well with his heart until he released the key when he had the opportunity to escape.

“Now it’s beyond fear that he will hurt us. But I’m afraid that he will hurt his friends more. So I want to bring the story to the end. Can’t accept his actions that took our pictures on social media and would like to have their pictures removed completely Which I don’t know how much or how much the photo was taken,” said Ms. Pim.

Initially, the officer detained the accused and sent an investigative officer. Bang Khen Police Station continues to prosecute the law.

sticks to every situation from