Open your mind, Miss Vietnam Miss Grand International, the latest, reveals the reason for raising 3 fingers in the middle of the stage 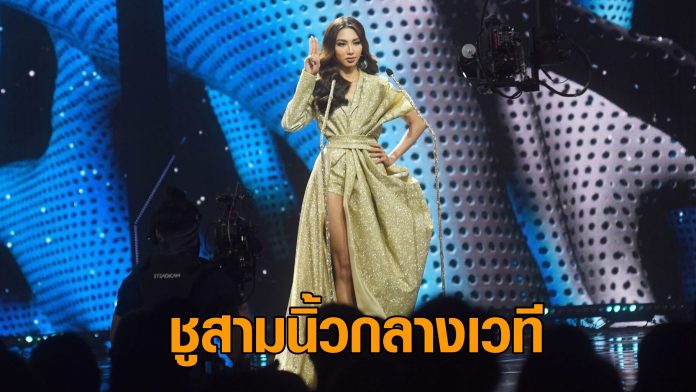 Open your mind, Miss Vietnam Miss Grand International, the latest, reveals the reason for raising 3 fingers in the middle of the stage

At 19:00 on December 4, the Miss Grand International 2021 pageant organizes the Final Competition at SHOW DC HALL.

Nguyen Tuk Tui Tien once said in English that every war that goes on is a dangerous battle between demons and fairies. But we can unite to control it. My parents told me that it’s important that we know what love is and how to share it with others. Love and compassion will keep war from happening. I believe this can change the world and we can all be heroes with this love and beauty.

before ending in Thai “Make the world a better place for everyone.” with three thumbs up

After the contest was over, Nguyen Tuk Tui Tien told Matichon what it meant to raise her three fingers:

“I was aware of the situation in Thailand a few months ago about the people protesting and fighting within Thailand. Therefore, I just want to raise three fingers with the meaning of the Thai sentence: “Make the world a place Better for everyone.” I think what happened in Thailand was a few months ago and now it’s a bit late to talk about it. Therefore, I would like to remind more people to help each other build a better world.”

However, winning this contest It is considered to be the “first crown” on the Miss Grand International stage. of a representative of a beautiful woman from Vietnam

Miss Grand International, the latest, reveals her feelings after being crowned Of course I’m very, very, very happy. At the same time, there was still a slight nervousness. ‘Cause I can’t believe I’m standing here

and when asked Why does she want to come to Thailand? (Due to the fact that she answered the question on stage that she studied Thai to live in Thailand for 1 year)

Nguyen Tuk Tui Tien replied: I told Khun Nawat in the interview that I want to stay in Thailand because I want to win the crown, I love it.