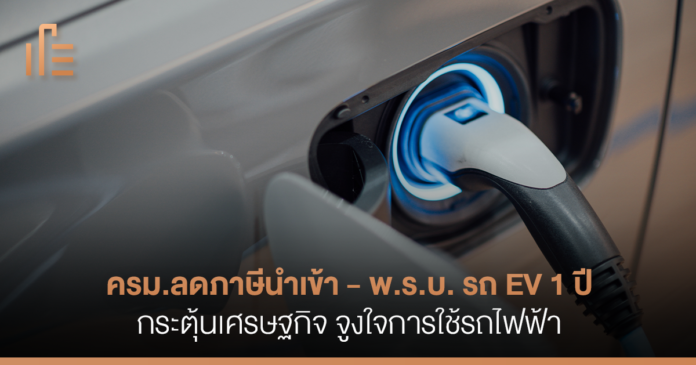 Government spokesman reveals that the Cabinet has knocked down the annual tax on EVs for a period of 1 year from the registration date. Incentives to use more electric vehicles Stimulate the economy of electric vehicle production as a whole of the country.

Thanakorn Wangboonkongchana, spokesman for the Prime Minister’s Office, revealed that the Cabinet has approved in principle the draft decree to reduce annual tax for electric-powered vehicles only.

There is a significant reduction in the annual tax rate. For registered electric-only vehicles Between October 1, 2022 and September 30, 2025, 80% of the specified rate will be reduced for a period of one year from the date of registration. In order to incentivize the use of electric vehicles more according to the government’s policy Promote and incentivize the use of environmentally friendly electric vehicles Reduce carbon dioxide emissions and PM 2.5 in the air, as well as stimulate the economy of electric vehicle production in the country as a whole.

It is estimated that 128,736 electric-powered vehicles will cause the state to lose about 18,974,572 baht in annual tax revenues for electric vehicles for fiscal year 2022-2025, which is a very small loss of 0.05%. compared to the total revenue collected by the Department of Land Transport which does not affect the income of Bangkok Metropolis and local administrative organizations