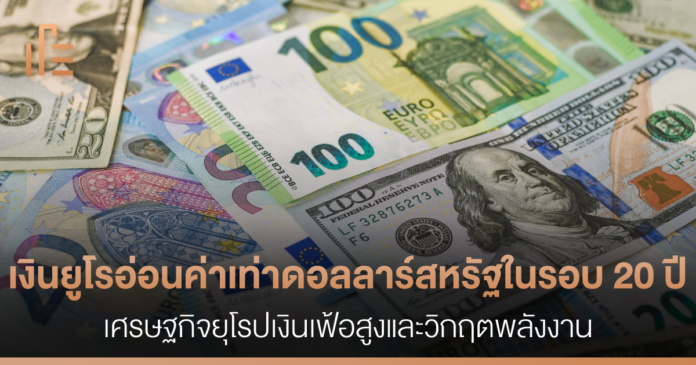 For the first time in 20 years, the exchange rate between the euro (EUR) and the US dollar (USD) from the euro has weakened to 1.007. Uncertainty of renewable energy supply from Russia

The EU gets about 40% of its gas through Russian oil pipelines. When the war broke out, the dependence on Russian oil and gas was reduced. Russia, on the other hand, is also limiting its gas supply to Europe.

Recently, Germany was restricted by Russia by 60%, prompting the government to declare a state of emergency on energy allocation. by limiting the heating system at night To be driven to the economy of the country

When the energy crisis comes with an economic recession Higher energy costs will directly affect the cost of living and inflation. Concerns have forced the European Central Bank (ECB) to speed up its policy to curb inflation.

Analysts said Aggressive interest rate hike by the European Central Bank Including the US Federal Reserve (FED) coupled with the economic slowdown will pressure the euro. But the US dollar will become a safe haven.

And it is expected that the situation of the euro may reach a low of 0.95 US dollars. This is good news for Americans planning to vacation in Europe. But that could be bad news for global economic stability.