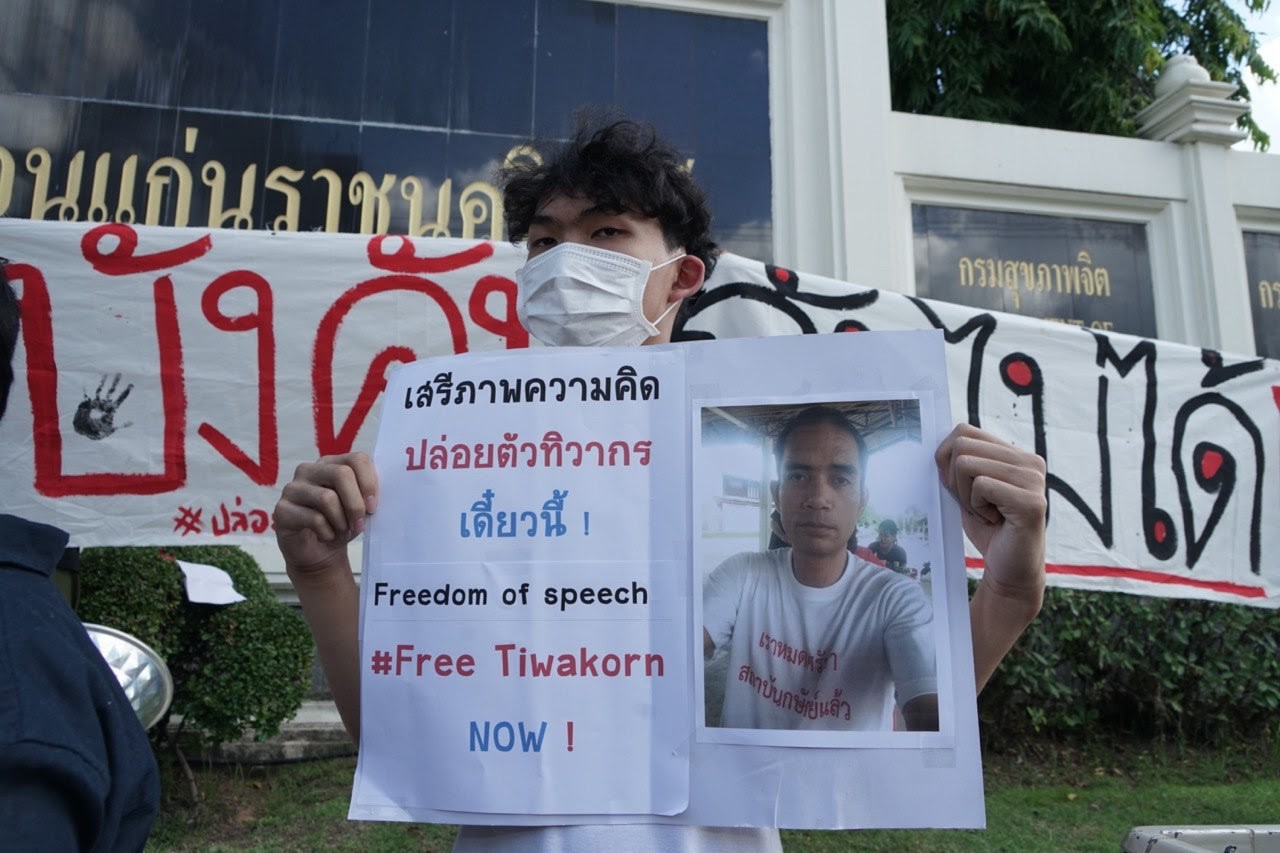 KHON KAEN – Civil rights groups and activists are calling for the release of a man who was forcibly taken to a psychiatric hospital after he posted online photos of him wearing a shirt with a slogan perceived critical of the monarchy.

In separate statements, Thai Lawyers For Human Rights (TLHR) and the Student Union of Thailand (SUT) urged the release of Tiwagorn Withiton from Rajanagarindra Psychiatric Hospital in Khon Kaen. The SUT also staged a small protest in front of the hospital on Friday afternoon.

The authorities admitted the 47-year-old Tiwagorn against his will at the hospital on July 9. Since June, he had posted several photos of himself in a shirt with the motto “I lost faith in the institution of the monarchy” on his personal Facebook account.

TLHR’s statement argued that the motto on Tiwagorn’s shirt does not violate any laws. The slogan does not count as defamation, insult, or a threat under the lèse majesté law, nor does it fall under sedition, or is in violation of the Computer Crime Act.

THLR also stated that the officials had no authority to force Tiwagorn to get treatment at the mental health hospital as he was not posing any threat or causing harm to anyone.

The statement of SUT, co-signed by 18 student groups, described Tiwagorn’s forced admission to the hospital as an “attempt by the state to control people’s views and prevent them from expressing their opinions freely.” They also called on MPs and human rights group to closely follow this case.

According to a report by Prachatai, the police searched Tiwakorn’s family home and confiscated his personal computer and mobile phone. His mother apparently signed a form of consent for the admission of Tiwakorn to the hospital after she was summoned by the police.

“This kind of detention can be called arbitrary detention intended to stop Tiwakorn from continuing to express his political opinions in public,” Sunai Phasuk, a senior researcher at Human Rights Watch Thailand, told The Isaan Record.

An Isaan Record reporter tried to visit Tiwakorn at the hospital on July 15 but was told that only his mother was allowed to see him.

“The patient is in good and normal health and is currently undergoing examination to determine whether he is ill or not,” said Kanokwan Kittiwattanakun, deput director of the Rajanagarindra Psychiatric Hospital. “We have to wait for the results that are to be delivered within one month.”

Before Tiwakorn was taken to the hospital, he explained in a Facebook post that the forced disappearance of Thai dissident Wanchalerm Satsaksit in Cambodia in early June had inspired him to produce the shirt.

“Loosing faith does not mean [wanting] to overthrow the monarchy,” he wrote.

Section 6 of the 2017 constitution places the King “in a position of revered worship” and protects the monarch from “any sort of accusation or action.” Royal defamation is punishable under Section 112 of the criminal code and carries a sentence of three to 15 years.

Last month, Prime Minister General Prayuth Chan-ocha told the press that the King had instructed the government to stop using the lèse-majesté law to prosecute civilians.

“You can see that today that we have not been using 112 at all,” Prayuth said. “You know why? It was because the King was kind enough to instruct that it should not be used.”