Chaba Kaew U-18 defeated Indonesia 3-0 in the knockout round of the ASEAN Championship. 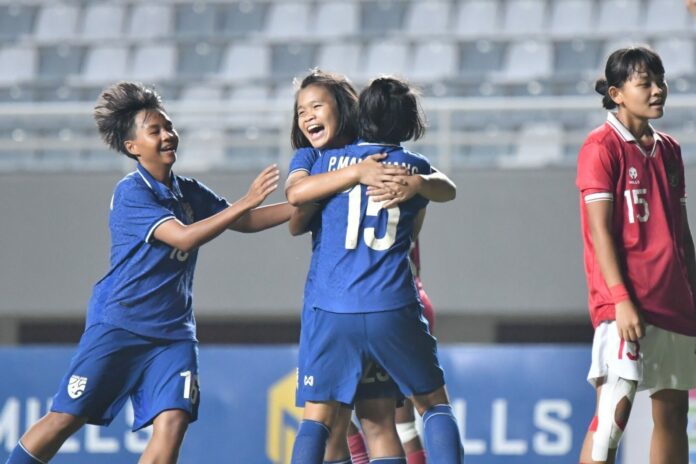 Chaba Kaew U-18 defeated Indonesia 3-0 in the knockout round of the ASEAN Championship.

The Thai women’s national football team, under 18 years old, took on the field for the third game of the ASEAN Championship. Destroy the host Indonesia 3-0 at the Gerola Jaga Baring Stadium on July 28.

The Thai national team has 6 points from the first 2 games, while Indonesia has played 3 games with 6 points from 2 wins and 1 draw.

In this game, Miyo Okamoto changed many players. But there are also main characters Aimee Kahapana, Thanchanok Chansri and Supaporn Inprasit.

Only 3 minutes to start the game, Suphansa Trisuto came to shoot for the Thai national team to lead quickly 1-0.

In the 26th minute, Suphansa Trisuto took the ball away from the Indonesian defender before shooting with the right, plugged in the first post to shoot and was his second goal in this game. Let the Thai national team lead Indonesia 2-0

The second half, 53rd minute, Pitchayathida Manowang received a single ball before pressing the right into it beautifully. Thailand leads Indonesia 3-0.

The rest of the time there are no more goals. End of the game. Thai women’s national football team. Under 18 years old, beat Indonesia 3-0 with 9 full points to qualify for the next round, of course. Indonesia was immediately eliminated.

for the next program The Thai women’s national football team under 18 will play the final game of the group stage against Vietnam at the Gelora Jakarta Baring Stadium on July 30 at 3:30 p.m. Go high to a party in the sky this payday Friday