Caught a girl at home, posted a picture of methamphetamine, confessed to ‘Pediatrics Thong’, wanted to use drugs and poke them to help. 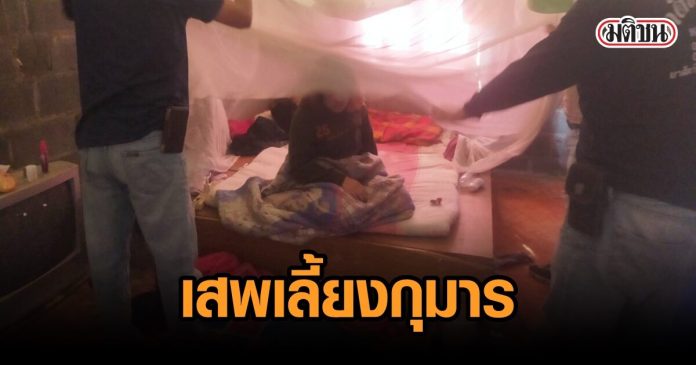 Buriram – catches a 21-year-old girl who posted the purchase and sale of methamphetamine on Facebook, confessing to buy it After the pediatrician who raised them wanted to drink

on January 15 Police Colonel Witsanu Arphonpong The Superintendent of Krasang Police Station, Krasang District, Buriram Province, ready Police Lieutenant Colonel Apichit Ekaram The Deputy Superintendent of Investigation at the Krasang Police Station led the arrests. Miss Suwannee or B Sai Lek, 21 years old, at a house with no number, Village No. 2, Thung Song Subdistrict, Krasang District, Buriram Province, after posting a picture of amphetamine via his personal Facebook page Along with writing a message in the manner of a methamphetamine dealer saying, “The price of methamphetamine is 2500, get 200 pills, sell 10 for 500, you get a lot of profit. Even with your daughter, you still haven’t given me enough.”

After that, the police brought him for questioning at the Krasang Police Station, where Ms. B confessed that to be a real poster And the picture that appears is real amphetamine, amount of 20 pills bought from amphetamine dealer for 1,000 baht. because of neglect of friends and wanting to go to sleep in prison again After having been jailed for a live drug use case

Miss B said that she admitted to taking drugs for a long time when she didn’t have a friend to bring it to her. When you have items, you give them to your friends. be kind to each other In addition, he raised two children’s pediatrics, used to invite pediatricians to take drugs together. After that, Kumarnthong became hungry. came to provoke that he asked for drugs, so he took them

See also  Found & quot; Snapper & quot; The oldest in the world Off the coast of australia

Initially, the police charged with possession of drugs. and a drug type 1 (amphetamine) for the history of Ms. B. had previously treated a nervous breakdown. had been hit by the police and the police investigation unit Buriram Province, arrested after a live broadcast of amphetamine use In May 2021, now on probation.

The post Caught a girl at home, posted a picture of methamphetamine, confessed to ‘Pediatrics Thong’, wanted to use drugs and poke them to help. appeared first on Matichon Online.