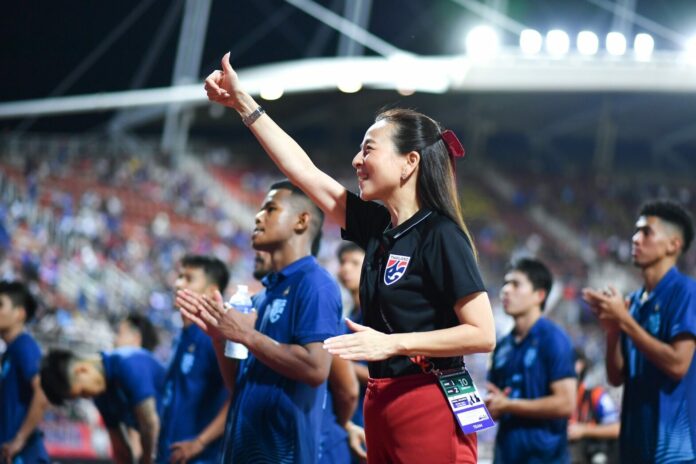 “Madam Pang” Mrs. Nualphan Lamsam, manager of the Thai national football team Mention of the ASEAN Football Championship game “AFF Mitsubishi Electric Cup 2022”, the second final, in which war elephants will duel with Vietnam. At the Thammasat Rangsit football stadium today (16 Jan) after the first game, the invasion was always 2-2, that over the past month we have worked hard and sacrificed together. Until finally arriving at the final game Despite the situation, we have an advantage over 2 Vietnamese away goals, but can’t be trusted, so I want everyone to show their determination to the fullest for the last 90 minutes where we put everything into it. Have faith in the children Everyone said we would get through it. to win the championship for Thai people

Madam Pang said that Regarding race tickets It’s a phenomenon that hasn’t happened in a long time that tickets are sold out in less than 5 minutes. Today, the power of faith from Thai football fans begins to return again. I hope everyone will join in creating a good atmosphere together. come cheer become a cheering force Let us advance to the title of the 7th ASEAN Championship, we will do our best. And hopefully we will have a chance to celebrate together after the game.

For the Thai national team, prepare to open home against Vietnam in the 2022 ASEAN Championship finals, match 2 on January 16 at 7:30 p.m. at Thammasat Stadium, Rangsit, broadcast live on Channel 9 Mcot HD30.