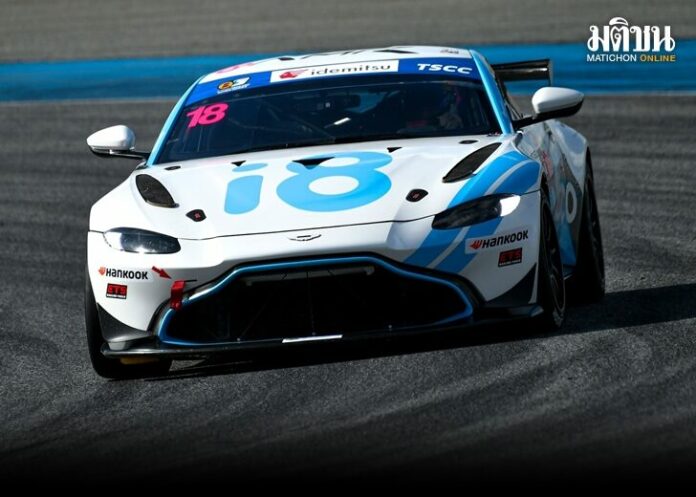 Aston Martin Racing Asia, one of the most powerful race cars that has proclaimed its prominence in the racing arena. with the first official request to enter the field In the biggest flat car race in ASEAN, Thailand Super Series 2022 (Thailand Super Series 2022), this time also grabbed the top racer like Adam Khalid, who is ready to soar with Powered by the Aston Martin i8 Vantage GT4, motorsport fans can stay on the edge of the field. experience speed beyond limit Throughout the competition at Chang International Circuit, Buriram Province on October 27-30 In the Thailand Super Car GTC race results, Adam Khalid was able to ride the i8 Vantage GT4 to the finish line in 3rd place. It was a satisfying result for his first time on the track. The elephant of a young Malaysian racer

Weiron Tan, Principle of Aston Martin Racing Asia, revealed that we are delighted to be a part of the Thailand Super Series (TSS) race at Chang International Circuit. This time also marks the 10th year of the competition and one of our pride is to bring the Aston Martin Vantage GT4 to the field for everyone to see. Throughout the competition of Thailand Super Series 2022

By racing cars on a flat road that is packed with excitement. Held from 27-30 October 2022 at Chang International Circuit and this time, the i8 Vantage GT4 has been chosen to act as the official representative of Aston Martin Racing Asia, sponsored by the manufacturer. This important collaboration also includes research. Develop cutting-edge technology Automotive engineering support and technical assistance All of which is accessible only to Aston Martin Racing Asia. The goal that has been set is to soar to the finals in the Thailand Super Series battle as well.

Adam Khalid, Malaysian racing driver The speed veteran said: A big thank you to Aston Martin Racing Asia for offering this great opportunity. After the last match I’m looking forward to the rest of the Super Series. As for the Vantage GT4, it’s a car that has been tried and tested. And it’s familiar because I’ve tested this state-of-the-art performance in the UK. There was also the opportunity to work with the familiar Aston Martin Racing Asia team. Therefore, I feel very good to be able to enter the field this time. By this time, the whole team And our racing cars will show everyone the true strength of performance. With our most recent appearance at the Thai Super Series Singapore GP Support, the team has been able to win both titles, giving us the drive and determination to create memorable victories together. yes

With experience of winning more than 20 titles in his racing career, Adam Khalid is also a record-breaking racer in Asia. and in a short time He has also won the “Rookie of the Year” award at the Speed ​​Festival three times and the Malaysian Endurance Championship twice.

In addition to that, there are two other important objectives. The first is to strengthen the Aston Martin Racing Asia team to the pinnacle of motor sport as an outstanding team. and being the vehicle that was thought of in the first place And the second is the widespread popularity of motorsport in Asia and with the popularity of motorsport. This gives sponsors exclusive access to elite audiences. who pay attention Ready to explode with excitement every time you watch the race. “This race is also a great opportunity for Aston Martin Racing Asia to gain more recognition in the region. And after this competition, we will increase our efforts and focus on pushing our potential to double in the future,” added Viaron Tan.

In addition to celebrating the grand launch of the i8 Vantage GT4 in the Thailand Super Series, the i8 Vantage GT4 Title Partner also presented an Aston Martin Vantage GT4 and participated in a Racing Training Experience event. Free of cost to only one lucky winner. Along with other prizes with a total value of up to 1 million USD as well You can follow or see more information via Thai Super Series and Aston Martin Racing Asia.