“Anutin” said that as long as the Minister of Public Health has no concept of “marijuana” as a drug. 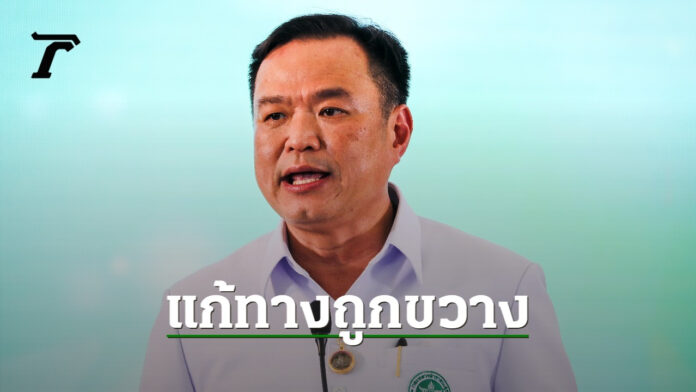 14 Nov. 65 Mr.Anutin Charnvirakul Deputy Prime Minister and Minister of Public Health gave interviews to reporters by phone. about efforts from political parties to bring cannabis back to drugs, stated

A call came to the Minister of Health, but learned that the removal of marijuana from the drug list. It is a resolution of the NACC (Prevention and Suppression of Drugs) committee must understand the context. We’re using cannabis to benefit. The law came out like this. It has to change your mind. Don’t go stamping It cannot be crossed. Efforts to exploit cannabis have been around for a long time. Let’s start before he becomes a minister again. have been used in research studies There are many data sheets. Later that information It is used to propose to the committee. NPA considers banning marijuana and the issuance of the Ministry’s announcement to take care of use

The reporter asked further. home cultivation of cannabis Will there be a problem in the matter of control or not? Mr. Anutin explained that

When there is alcohol, there are cigarettes in the house. child opening a drinking bottle Open the envelope and use it, but the cannabis plant, before you can use it, it has to go through the process. The process is difficult Compared to alcohol and cigarettes, it is If we are parents We have to take care of our children, which is family care, but in general, the Ministry of Public Health has been announced That people under the age of 20 can’t use marijuana, but if it’s violated, it’s illegal. Civil officials have to prosecute But the important thing is to understand. We live in the house, have children, have grandchildren, must know that. What is the benefit, what is the punishment, but if someone breaks the law? Civil officials have to manage

The reporter asked about the reason for the announcement of the Ministry of Public Health for the bouquet. It is a control herb. Mr. Anutin replied that

Originally, I hoped that the Acthemp Marijuana will be considered soon. because when proposed at the first agenda Overwhelmed by the principles, then a committee was set up, with all parties involved in drafting the first decree with only 45 sections. to cover all the concerns of all parties, which now has a political party that used to accept the principle It came out and said that it would overturn it, contrary to the intention, because this statute was created to control the misuse. reduce public concern Everything has a process. If now it can be seen that many parties are trying to overturn this law, the ministry must reduce people’s concerns. But it doesn’t make those who decide to invest in marijuana. And doing it legally, must be damaged. Treatment of patients. must not be interrupted We therefore issued an announcement to ensure that who are concerned about inflorescences We will come to control the bouquet. If used, permission is required. There is a clear method

Mr Anutin reiterated the need to safeguard the public’s health and economic benefits, along with having laws to control risks that are a concern. before ending that

“As long as the Minister of Health I have no policy to ask the NACC to consider turning cannabis into a drug. We have preventive measures. We have started to benefit the people. must go forward What is the policy of this government? Article 4 is clearly written. Encourage people to use cannabis plants, hemp for medicine, health and economy. Promote folk wisdom. to generate income to mix It’s for adding economic value. but have to make it legal what is illegal have to deal with that I am a minister who listens to executives in the ministry. If you do something bad There must have been another executive in the ministry had told me, but asked why today, all over the country, there are medical marijuana clinics in hospitals. people with Parkinson’s disease sleepless person people with psoriasis He has benefited from using It depends on what angle you look at it from. but in the end must look at safety look at society We have passed June 9, half a year. There is still no problem to be a hurdle. Unless we made up our own stories.”