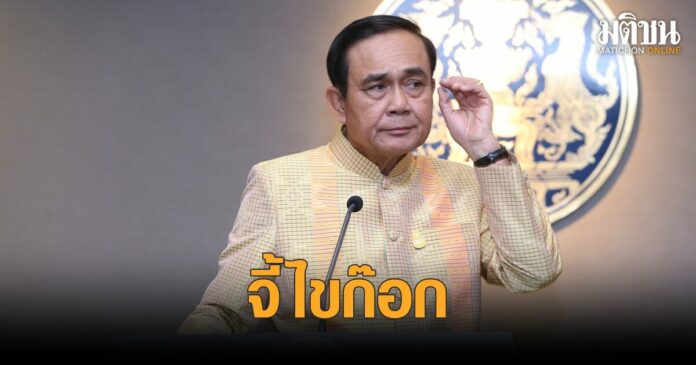 A group of 99 Thai citizens chided ‘Big Tu’ to crack the cork before August 24th. The sentence has been sitting as prime minister for 8 years, pointing out that it is not right to stay.

On August 1, the pressure on Gen. Prayut Chan-o-cha, Prime Minister and Minister of Defense The resignation is getting stronger. From the case of the Prime Minister’s seat for 8 years under the Constitution 2017

On July 31, at the Memorial Hall on October 14, Khok Wua intersection, Bangkok, Metha Maskhao, secretary-general of the Campaign for Democracy Committee (CRC), on behalf of 99 Thai intellectuals and citizens, made a statement calling for General Prayut resigned as prime minister Due to the expiration of 8 years according to the 2017 Constitution and lack of legitimacy in the administration of the country

Mehtha said that because of the 2017 Constitution, Article 158 states that the Prime Minister cannot hold office for more than eight years. Regardless of whether they hold consecutive positions or not but shall not include the period of time during which he continues to perform duties after the vacation of office. Contrary to the constitution and conflict in Thai society A group of 99 Thai intellectuals and citizens aiming for a better development in Thai politics. therefore calls for General Prayut Sacrificed to resign before August 24, because the Prime Minister will not be able to hold office for more than 8 years, regardless of whether or not he has been in office consecutively.

Mehtha said that if the prime minister wants to extend his term by misinterpreting the constitution on his own side. It will make a lifelong taint and severely violate the morality of politicians. This caused the government to lack legitimacy and good governance in the country’s administration. Until the conflict and political turmoil caused by the disunity between the military, government officials and the people, which has escalated every moment.

This website uses cookies to improve your experience while you navigate through the website. Out of these, the cookies that are categorized as necessary are stored on your browser as they are essential for the working of basic functionalities of the website. We also use third-party cookies that help us analyze and understand how you use this website. These cookies will be stored in your browser only with your consent. You also have the option to opt-out of these cookies. But opting out of some of these cookies may affect your browsing experience.
Necessary Always Enabled
Necessary cookies are absolutely essential for the website to function properly. This category only includes cookies that ensures basic functionalities and security features of the website. These cookies do not store any personal information.
Non-necessary
Any cookies that may not be particularly necessary for the website to function and is used specifically to collect user personal data via analytics, ads, other embedded contents are termed as non-necessary cookies. It is mandatory to procure user consent prior to running these cookies on your website.
SAVE & ACCEPT
<!-- Cache serv