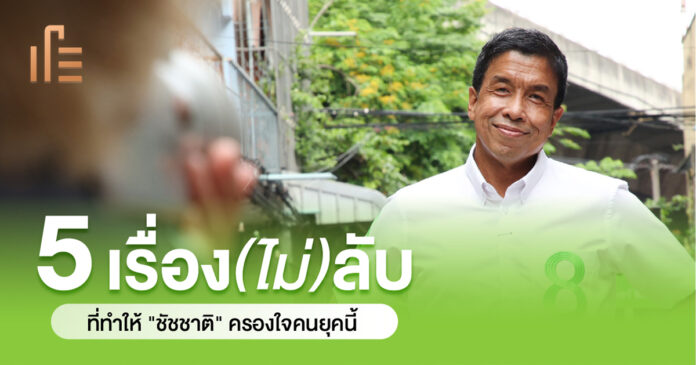 Work, work, work, one of the catchy words that helps ignite the fire of people in this era. I believe that many people have heard it through their ears. About the famous phrase of the current Bangkok governor “Chatchat Sitthiphan” with a strong personality Comes with the most confident and understanding words. and expressed through decisive action It’s not surprising at all. That this man can dominate the hearts of the new generation is overwhelming.

Even though the election war has ended, it cannot be denied that Chatchat Still getting the attention of the people always. whether through the content of the fan page Chatchat Sitthiphan or from other media It still presents various stories. always his The content that flows on social media is not only about the work. But… those content also allow us to see the identity of Chatchat that helps people to know him better.
.
And today the Thumbsup team has gathered information. Ready to study behind the scenes about 5 (not) secret stories of “Chatchat Sitthiphan” that can dominate the hearts of people in this era What interesting stories will there be? Including the planning or the team that helps in this matter? Let’s go follow 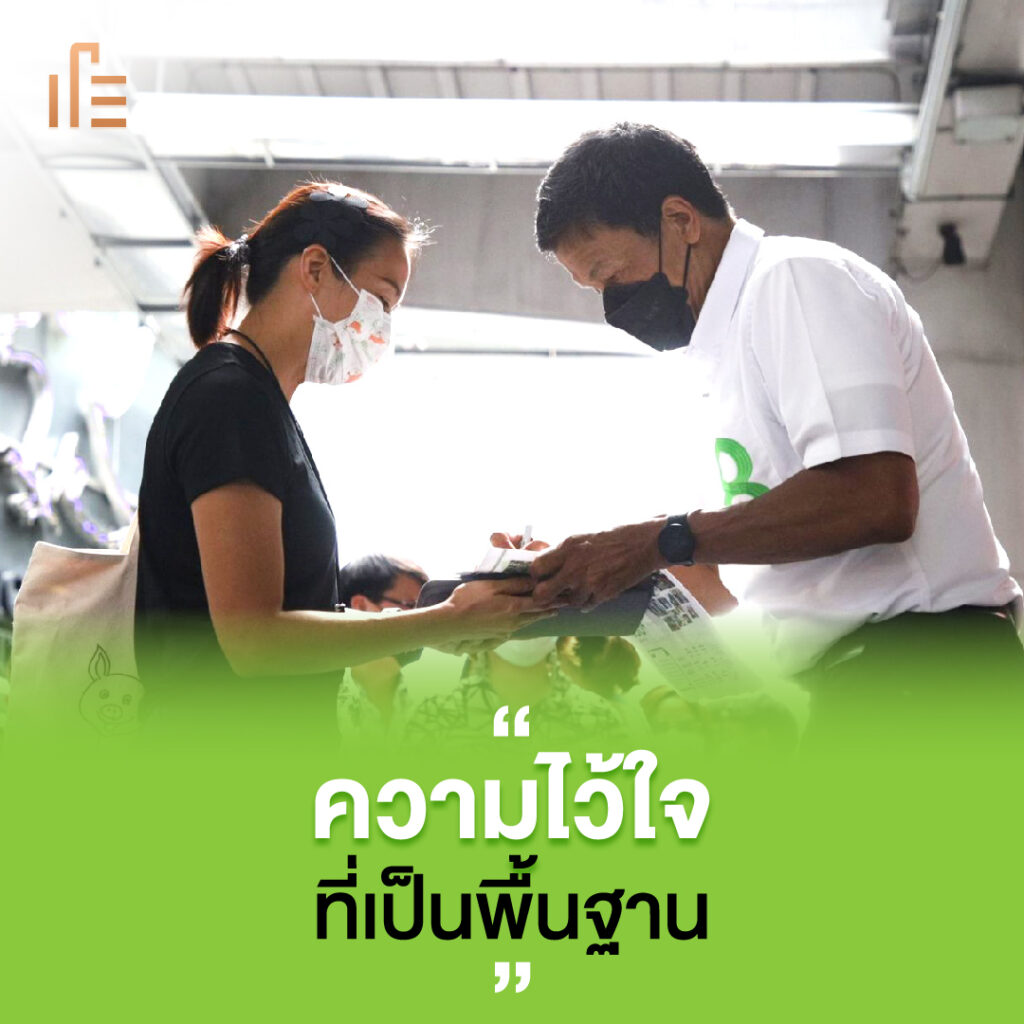 One of the team members Chatchat at “Subdue Lao Harojanaphand” told the story behind the work And the beginning of an election campaign that created many phenomena. that all this began with a feeling of trust and the confidence of the team towards Chatchat Therefore, the core concept of the campaign is “Passing on Trust (Trust)” to the people through a balanced pattern between Disclosure of Chatchat’s identity to make people trust with not having to reveal a lot of identity Just focus on doing quality work. and benefit the most people

If we observe the attitude of the people after the results of the election are completed Most of them have only positive energy given to Chatchat. whether sympathy and confidence in what Chatchat is trying to do more than ever. The main reason may be that people feel like a new hope they can hold onto and rely on.

By asking how these feelings arise? It must be appreciated that the Chatchat team can communicate. Key Messege to the point and adhere to continue to pass on this trust before running for election, during the campaign and after the election All of which we can see from the intention of making content. various public relations When combined with the identity of Chatchat who is already a person like this Therefore, it is not surprising if people in this era feel trust.

Friendly that is easy to reach 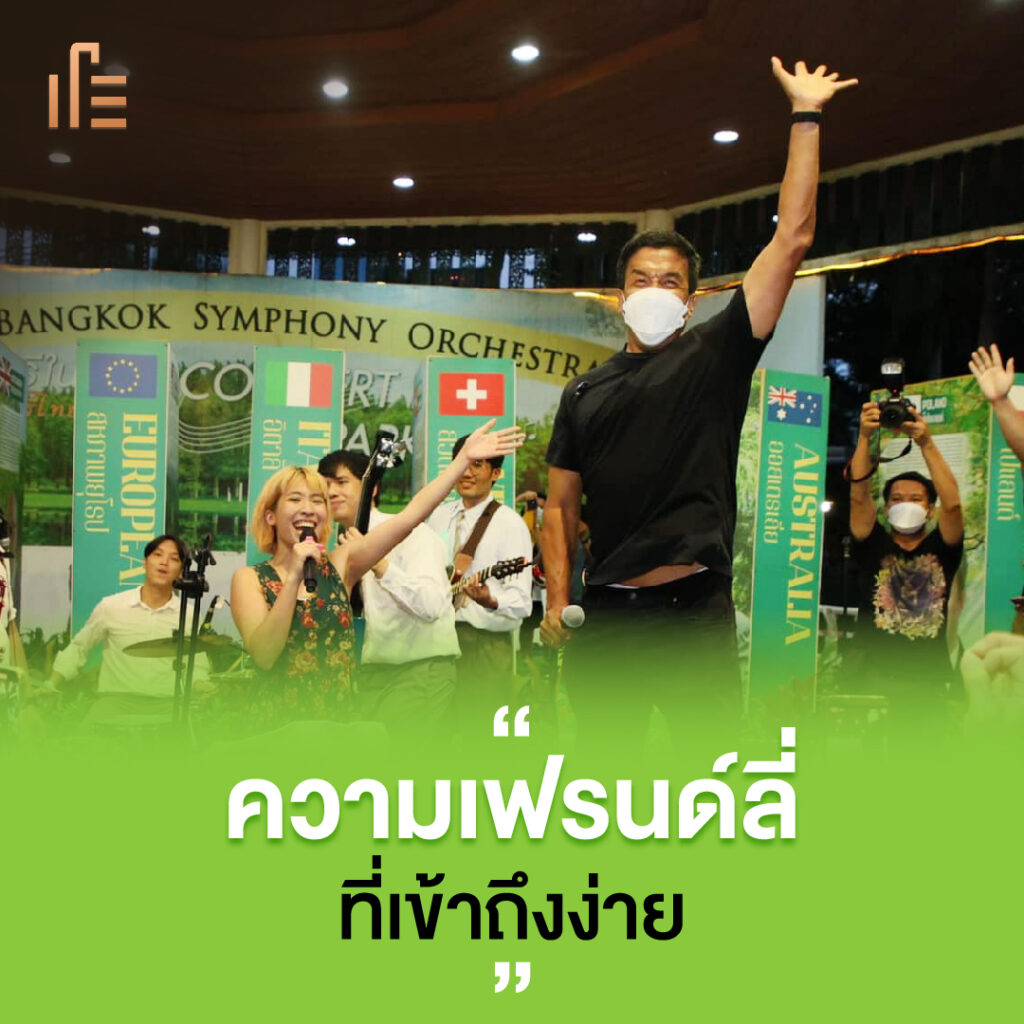 It is undeniable that these days one of the most common male faces we see on social media. inevitable because of the friendly personality and easy access of the owner We will see Chatchat showing up at many events. talk to the people Or have close-up pictures of the people who actually work?

In addition, Chatchat has a life like a normal person. Not more wonderful than others As we have seen Chatchat Travel by public transport or a picture of a simple life Buy curry rice and eat it at a restaurant. don’t have to be elegant

In addition, Chatchat’s election campaign was a novelty. Friendly, approachable like never before. Because it is a campaign campaign using cartoons. Which would be another question that many people wonder, eh!? Why did you choose cartoons in the campaign?

The Chatchat team thinks that the use of cartoons is presented. able to communicate Key Emotion better, and at times it also adds a soft touch to communicating difficult issues. politically or answering questions on various issues that is sensitive

which these things made people feel even more Chatchat Be an approachable leader But on the other hand, we will see that Chatchat Had to deal with some people who came to complain with some screaming, some crying, with the person dealing with the situation in front of them. with equanimity ready to talk rationally and help to coordinate the problem solving

Consistency that can be seen

For those who follow Chatchat’s Facebook fan page believe in every One must have seen the live notifications that come up regularly. By every time referred to go out to the area or explore problems in various fields There will always be a team to support in this area. which we see that the live It’s a quick, easy, and really useful method.

because people can see how Chatchat works Including getting to know many problems from many areas For example, in July during heavy rain. There was a storm that caused flooding in Soi Sukhumvit 67. The owner also took a look at the flooded area by calling a motorcycle taxi. and broadcast live via mobile by yourself and report the situation to the public

and this consistency This made people see the efforts to take better care of Bangkok and see the beginning of solving the capillary problems according to the policy laid down. It can be said that what Chatchat is doing every day gradually. I have begun to buy some people’s hearts already. 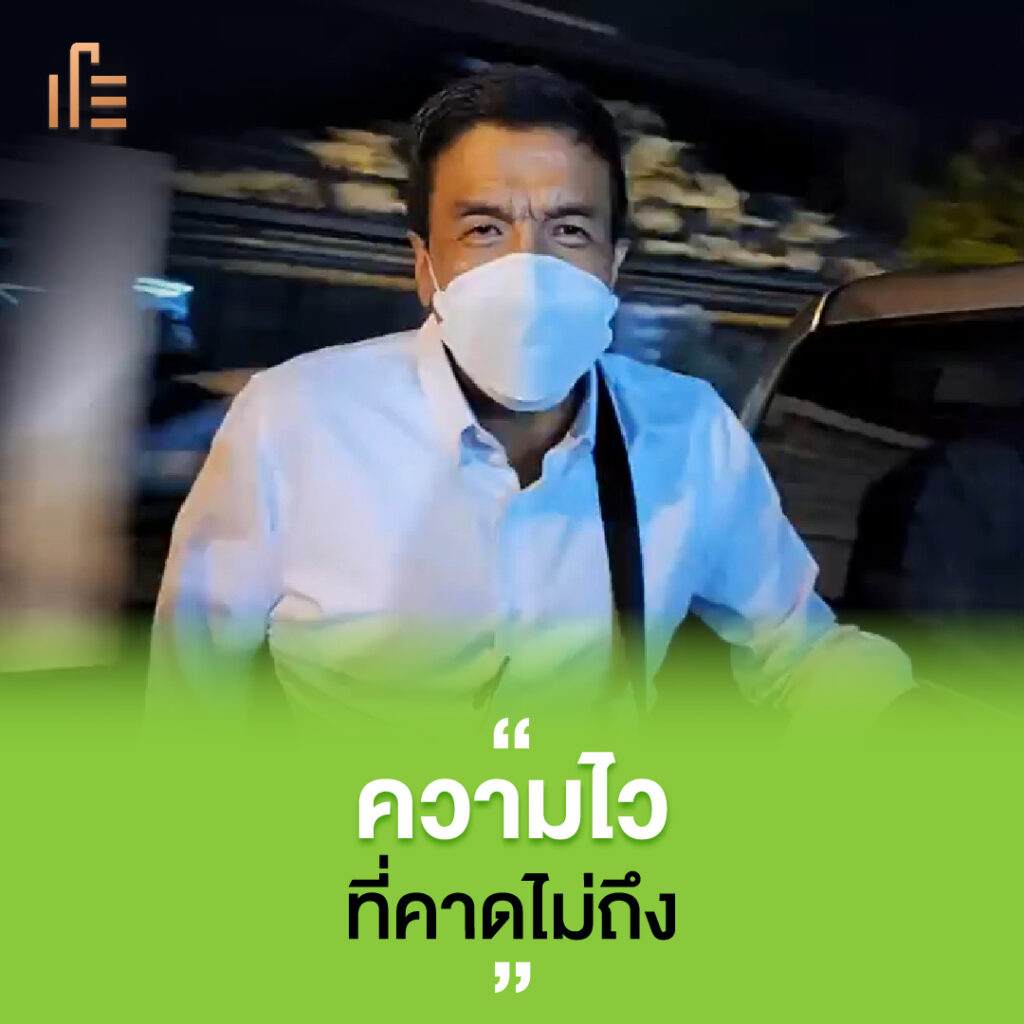 One of the highlights of Chatchat that cannot be mentioned. That is, the agility to work or take action on problems that arise quickly. Based on the character of the old capital of Chatchat who is agile, energetic and alert all the time. Makes when there is an urgent situation in Bangkok whether the flood Or where there is a misunderstanding? We will see Chatchat rushing to that place. to solve problems and standby is always beside the people

It can be seen in the viral clip that Chatchat had been rejected by a taxi. causing netizens to tease No matter how strong he was, he was completely defeated by the gas. in which part of this issue that went viral overnight Chatchat didn’t wait.. The next morning, he came out to clarify the fact that the driver did not refuse. But he is waiting for the customer from the Grab app, ready to go to the taxi driver. and sincerely apologized for causing reprimand from the public

from the two events described above The more it makes people buy the hearts of the people in the fist. with speed and care to resolve the situation plus reporting on various situations Real-time, the more people’s hearts can be won. 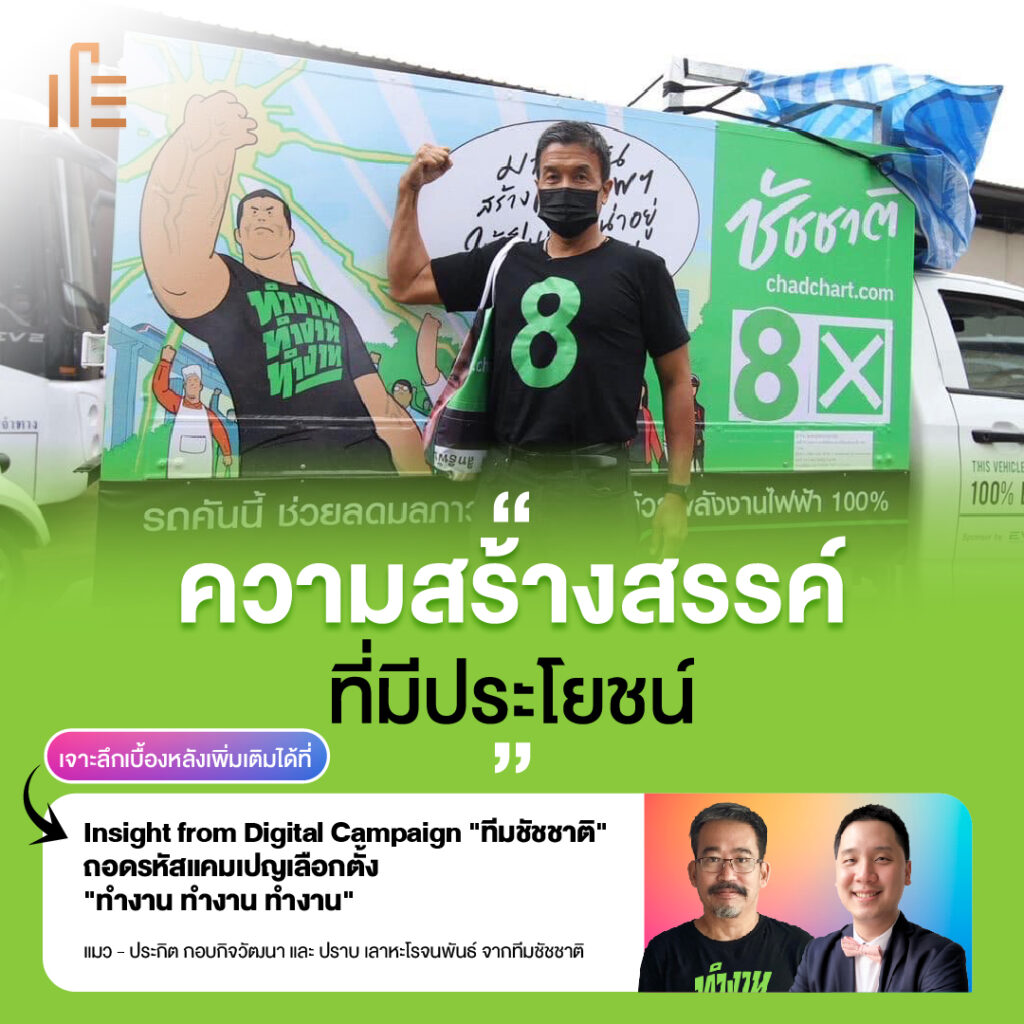 Finally, from the 4 topics mentioned above It is what anyone can do It doesn’t have to be just chachat, but there is one thing that sets it apart from others. Being creative is truly beneficial to people.

During the election, candidates from various parties are devising campaigns and policies to build people’s confidence. Most of the presentation formats are similar. Not much different

which we would like everyone to have a look at Chatchat’s campaign The content presented is the same as other parties. But the Chatchat team chose to present it in a different angle. and make it more memorable or successful, such as presenting 200 policies in 2 minutes through rap. Of course, many people do not like to read the policy. This made the Chatchat team choose to bring Pain Point here to create a new and creative way of presenting.

Or choosing to make a campaign vinyl that is small, fit, not cluttering the footpath. which Chatchat is considered to be the first group to choose to do this way. And it also shows people that this vinyl sign will not be garbage. Because it was thought from the beginning that after the election it will be used to make a bag as well.

Therefore, it can be seen that in order to create content or communicate something to the public, you should first look at Pain Point and create a new way of presenting it. Just this will make the information we communicate to the right people. And cause various actions that follow, both in terms of cooperation in compliance with the policy. or the greater trust of the people

You can listen to the sequel at the event. iCreator Conference 2022 Meet with Khun Maew and Khun Prab Branding Consultancy from Chatchat team. to come together to discuss in the session “The Next Bangkok decode ‘work, work, work’, creating a new chapter of Bangkok’s legend” A session that will open up both strategic perspectives. and creativity through election campaigns